Posted on Thursday 2 May 2019 by Gareth Prior

Today if you mention either of the remaining original motors built for the Manx Electric Railway you think about how they are marketed as the world’s oldest trams and treated as such. But head back into the last century and it was a very different matter with both 1 and 2 spending time in use by the engineering team.

Dating from 1979 this photo was taken at Laxey Station and shows what is believed to be no. 2 in use with the engineering team. It is propelling a Wagon – again unable to be fully identified – which seems to have some form of vehicle or generator on board. Heading north through the station a group of passengers look on as they wait for a car up to Snaefell summit.

2 would receive a repaint in the workshops a couple of winters after this photo was taken and now fortunately its days in use as an engineering car are well in the past. 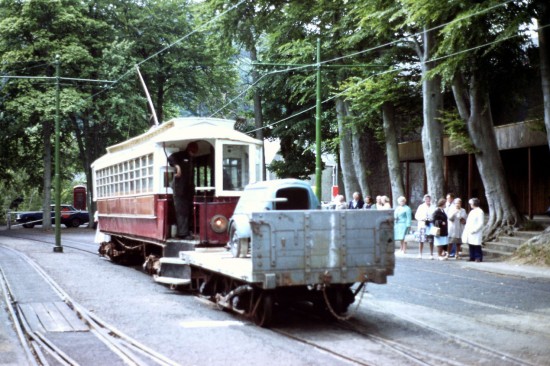