Posted on Wednesday 1 May 2019 by Gareth Prior

Things are improving on the Tyne and Wear Metro following the two separate incidents of the overhead coming down on Monday 29th April but still passengers in the section between St James and Wallsend are waiting for a return to their services with work on the repair of the overhead at Chillingham Road ongoing. No estimate has been given for a full resumption of services on the Metro but Nexus have stated they hope to resume services “as soon as we can”.

The problems started on Monday 29th April when the overhead came down at both Monkseaton and Chillingham Road. Nexus repair teams were soon on the scene with priority given to repairing the section at Monkseaton as this was considered to be more important as it would enable more passengers to be served once fixed. This work was concluded allowing a service to resume between Benton and North Shields shortly before 1900 on Tuesday 30th April. A temporary alteration to the power supply was then put in place which allowed the service to be extended to Wallsend. This now allows trains to run from South Shields to Wallsend via the Coast meaning only the section between Wallsend and St James is without a service (affecting stations at Walkergate, Chillingham Road, Byker and Manors). The benefit of extending the service to Wallsend is that there are a number of service buses which serve the city from this location meaning less people will be severely inconvenienced.

Work has now progressed to the 500 metre section of overhead which came down at Chillingham Road. This task has been complicated by what Nexus are describing as a complex recovery operation of the train involved in bringing the overhead down.

Huw Lewis, Customer Services Director at Nexus, explains more: “Our engineers have been working round the clock to repair damage to more than a kilometre of fallen overhead line at two locations since Monday. They need to remove damaged cables and supports and run out whole new sections of wire and this takes time but we are doing everything possible. Until last night we put all our effort into repairing the first section near Monkseaton, because that would help the most passengers, then temporarily altering our power supply so we could get trains first into North Shields and then this morning into Wallsend. All our focus is now on the second section near Chillingham Road. I know how hard this has been for passengers who rely on Metro in North Tyneside, and we have worked hard with the support of local bus operators to provide the best service possible under difficult circumstances. I’d like to thank them and their staff for their efforts, as well as our own customer service and engineering teams. The most likely cause of the failures was a train bringing down the overhead line from which it normally draws power. We are busy procuring a new £362m train fleet which will hugely improve reliability and cut the risk of delays like this. We are also investing more than £20m in replacing overhead power lines throughout the network. The trains and overhead power lines are two of the oldest assets Metro relies on and underlines the need to continue to invest in Metro now and in future.”

Although Nexus considered suspending the planned rail replacement works around Gateshead over this Bank Holiday weekend they have confirmed that these will continue as it would have added an extra £1.2m of the total cost to do so. This will see no Metro between Monument and Hebburn and Brockley Whins throughout the weekend. 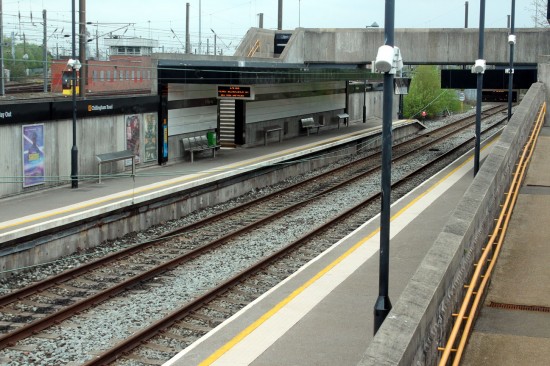 The scene at Chillingham Road on 1st May showing the sag in the overhead. The East Coast Mainline is the on the left hand side of the Metro lines here. 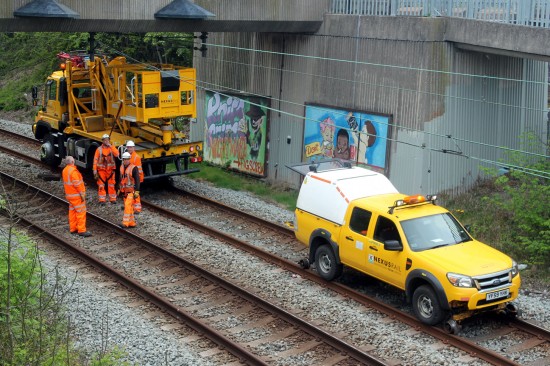 The Nexus repair scenes on site to repair the damage with a couple of road-rail vehicles to assist. (Both Photographs by Trevor Hall, 1st May 2019)