Posted on Tuesday 23 April 2019 by Gareth Prior

A tram expected to return to service in Blackpool this year will be Balloon 707. In this week’s Blackpool Picture in Time feature we include that tram just after its conversion to a flat fronted format.

This photo was taken in 1998 the year that the finished product was unveiled to the world. 707 was to be the first of four of the Balloon Cars which would lose their iconic streamlined shape for this simpler style – said at the time to be safer without any sharp edges. Never particularly popular with enthusiasts bearing in mind what it had replaced it did provide a bit more variety onto the tramway. This view shows 707 outside Rigby Road Depot showing off its new shape and fleet livery of the period, including black window surrounds. 707 remained in service until the end of traditional tramway operation and was fitted with the widened centre entrances for operation on the upgraded tramway – something which has never really happened. 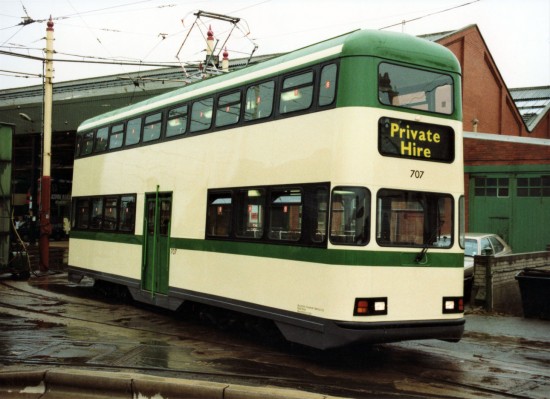