Blackpool’s heritage fleet – a look back at 2012

2012 was the first year for Blackpool Transport’s designated heritage tram fleet, restricted to use on tours and private hires only. Although there have been trams in the Blackpool fleet that have been considered ‘special’, such as those borrowed from museums, for many years, this was the first year that these have been considered seperate from the main running fleet, and had a clearly defined role as tourist attractions.

The strong and weak points of the heritage coastal tours have been well documented before, and it is generally accepted that loadings where very disapointing for much of the year. However, in a complete contrast, the illumination tours were extremely well patronised, giving renewed hope that the future for vintage trams in Blackpool is likely to be a positive one. This article reviews the past year for the trams which made up the heritage fleet during 2012.

Fleetwood ‘Box’ 40‘s loan period was extended by the Tramway Museum Society, allowing it to return to use from 7th April. Unfortunately, 40‘s tendency to leak meant it saw little use during the rather soggy summer, but it did become the first vintage car to run to Fleetwood Ferry since 2009, when it operated a private charter on 30th April.

Bolton 66 returned to use on the first day of the heritage tours, 6th April, following the fitting of transponders over winter; this being its first outing since 2010. The tram was used quite often in the early season but was then admitted to the works, requiring attention to a defective axle. It was back in action on 30th August, and then ran a private hire to Fleetwood on October 1st, thanks to the fitting of small halogen lights on its end bumpers. This was also thought to be its last appearance of the year.

Standard 147 had a busy year on the heritage tours, starting on April 6th. High points included the tram’s use to carry the Olympic flame on June 22nd, in place of a Boat car due to the diabolical weather on this day. 147 was also a regular performer on illumination tours and was one of the favoured trams once the three illuminated feature cars had already gone out. The tram retains adverts for the Fylde Tramway Society.

Open Boat 230 was also reactivated for 2012 after an enforced lay-off throughout 2011, due to the lack of transponders at that time. The tram was outshopped in 1970s style livery and with its original fleet number, and named ‘George Formby OBE’, with images of the late entertainer on plaques within the trolley tower. After being launched on a very wet 9th June by members of the George Formby Society, 230 was then used fairly regularly up to the end of August.

Twin Set 272+T2 also regained their old fleet numerals following a repaint, which saw it returned to the 1960s cream livery with green lining. A small launch ceremony to welcome the Twin car into the heritage fleet took place at Pleasure Beach on September 14th. It then ran most weekends for the rest of the peak season, and ended a triumphant year with a tour to Fleetwood for the Fylde Tramway Society on 29th December.

Open Boat 600 emerged from Rigby Road for the first time in 2012 surprisingly early: on 29th February it was chosen to test the overhead alignment, venturing to Thornton Gate for the first time since its major overhaul was completed. Its passenger debut for the year followed on 5th May, and 600 saw regular use after that, concluding with a couple of illumination tours in early September.

Brush Railcoach 631 was not expected to run in 2012, but a decision to keep a representative of the Brush cars available for operation in Blackpool saw 631 back on the prom on July 8th. After this date, it was used extensively for the rest of the summer. After the illuminations it was transferred to Starr Gate for some work to improve its appearance, including the removal of its expired all-over advert for Walls Ice Cream.

Centenary car 648 was another tram which was thought to have run for the last time in November 2011, but due to popular demand (yes, really!) it was decided to use it as a ‘heritage’ tram. 648 ran just once in this guise, on June 10th, when it unfortantely suffered a fault. However, it was seen out again during October when it was used for crew training, indicating that BTS intend to continue to run this tram for the forseeable future.

Rebuilt Balloon car 700 is not technically classed as a heritage tram, having been rebuilt with widened centre entrances for continued use on the modernised tramway. Despite this, it was used on heritage tours on a few occasions in 2012, both before and after the application of the new purple and white fleet livery. At the end of the year, 700 lost one of its last remaining ‘heritage’ features: the top deck swing-over seats, hopefully meaning that it will be used more appropriately in 2013!

‘Princess Alice’ 706 ran on April 7th for the first time since returning from Heaton Park in November 2010, and after being fitted with transponders. Sadly 706 suffered numerous electrical faults whilst in service, and required some attention its inverter. The tram is not thought to have run since July, but is expected to return in 2013 when it will hopefully run much more succesfully.

Balloon 717 was kept busy during 2012, being one of the first choice heritage cars for use in bad weather. This included numerous illumination tours, particularly during the last week of the main season when it ran daily as part of an increased output.

The Western Train 733+734 ran occasionally on the heritage service in the summer, although it suffered from a number of breakdowns. Its trolley proved especially problematic, leading to it being towed in on several occasions. However, this didn’t stop the Train from running most nights during the illuminations when it proved as popular as ever, although the change of starting point for the tours meant that it had to perform a complicated shunt move each day to ensure that it arrived at Pleasure Beach facing the right way!

‘HMS Blackpool’ 736 was used quite frequently in the spring as an attractive fully enclosed car for the heritage tours. Although this was criticised by some enthusiasts, the use of the Frigate in daylight was a great novelty to many people. During the illuminations (1st September to 4th November) it is thought to have run every night and proved extremely reliable throughout the year.

Illuminated Trawler 737 was used for testing before the tramway re-opened, before it and the Frigate carried passengers on 6th April when poor weather saw them sent out as replacements for other older trams. 737 then saw semi-regular use until the lights switched on, and then it too ran nearly every night up to November 4th.

Other trams retained for the heritage fleet, including Boat 602, Coronation 660 and Twin Set 675+685, failed to run during 2012 but should do so at some point in the future. It remains to be seen whether any of these trams will receive the required work to enable them to run this year, but 2012 has showed that the Blackpool tramway remains full of surprises, and so just about anything is possible! 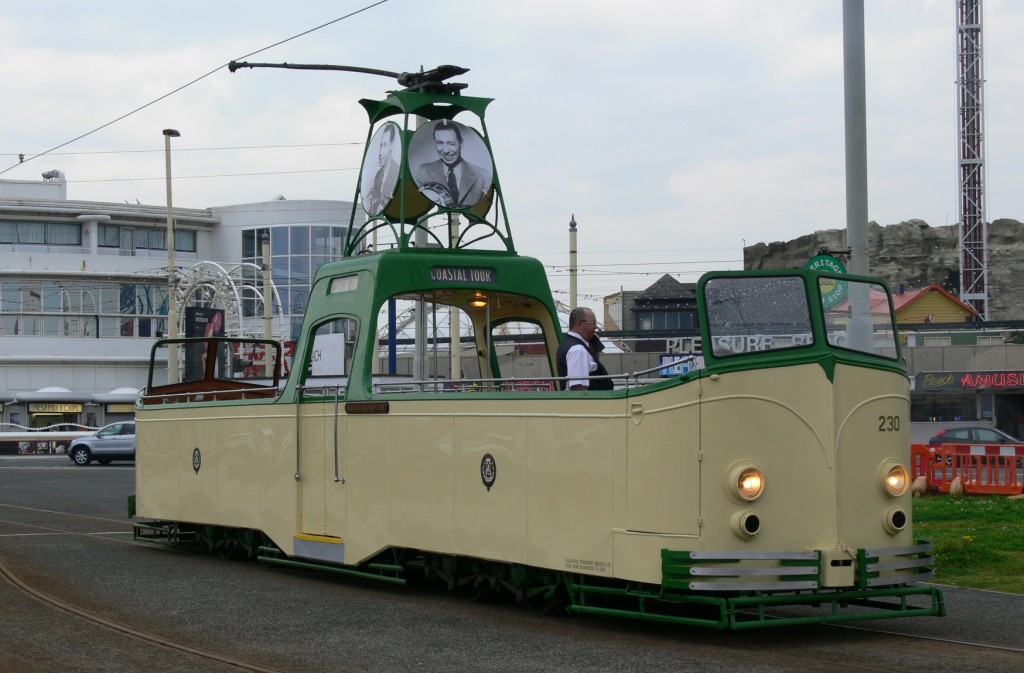 Undoubtedly one of the stars of the heritage fleet in 2012 was Boat 230 (ex-604), seen here at Pleasure Beach in between trips on a typically dull August day! (Photo by Andrew Waddington)