Oh, what a lovely tour!

On Sunday 6th November 2011, Blackpool Twin set 672+682 operated what was billed as its last ever enthusiast tour on its native system. Happily, this did not turn out to be the case, with a more positive attitude by Blackpool Transport towards its historic tramcars resulting in the Twin car being retained for further use as part of their own heritage fleet. Therefore, one month and twenty-three days after its ‘farewell’ tour, the set were back on enthusiast tour duty!

A lot has changed during that time, of course. 672+682 have regained their old identities as 272+T2, and been repainted in the mainly cream livery applied to the Twin cars when new. More importantly, the entire length of the Blackpool tramway has re-opened, meaning that a much more interesting run could be offered than was possible in 2011. So, the Fylde Tramway Society’s Christmas Tour using 272+T2 on Saturday 29th December was a much anticipated event, so much so that the tour was a complete sell out!

The tour commenced from North Pier at 11:00am, with the trams first heading to the familiar location of Little Bispham before travelling south to Pleasure Beach. Even a fault with 272‘s headlights did not spoil the fun; as a fitter was unable to cure the problem, the trams were dispatched to Foxhall to reverse, with the trailer leading for the remainer of the day. After returning to Pleasure Beach, set 2 then headed to Fleetwood where it was parked on the spare track at the Ferry loop for a one hour break. This was the most noteworthy part of the tour as 272+T2 became the only the second heritage car to stable there (Bolton 66 having become the first in October), and this also marked the first visit of a Twin set to Fleetwood Ferry since November 2009! Indeed, it was the first trip north of Little Bispham for this particular set since the 2010 illuminations, and the sight of the cream Twin car trundling through the streets of Fleetwood was much photographed.

After the break, the trams headed back to Pleasure Beach before performing a second run to Fleetwood, arriving in darkness. All too soon it was time to head back to Blackpool and the tour was terminated at North Pier, with the tram heading back to Rigby Road empty to resume hibernation for the winter. The first tour organised by the Fylde Tramway Society since completion of the tramway upgrade had been a huge success, and has hopefully paved the way for further tours by the FTS using the retained heritage trams. Thanks to the expert organisation, all who attended seemed to enjoy their day and hopefully now that things have settled down on the modernised Blackpool tramway, it will be possible to operate more tours like this one during 2013. 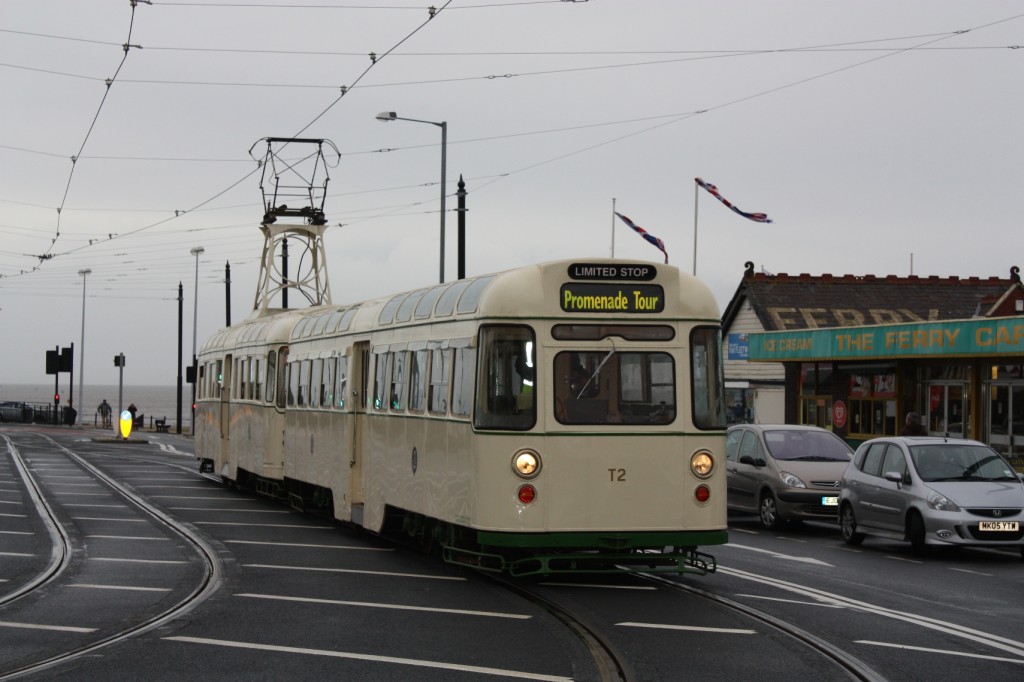 T2 + 272 stand proudly at the old Fleetwood Ferry tram stop following an absence of over three years, during a lunch break on the FTS Christmas Tour 2012. (Photo by Andrew Blood)

1 Response to Oh, what a lovely tour!