It’s a yes! Trams will go to Newhaven after approval given to extension

Posted on Thursday 14 March 2019 by Gareth Prior

It’s the news we have been waiting for – Edinburgh Trams will be extended to Newhaven via Leith Walk after councillors at a full council meeting on Thursday 14th March voted in favour of the £207.3 million project going ahead. The 2.8 mile extension will continue the current line beyond the terminus at York Place (which will be removed and replaced by a new stop at Picardy Place) to Newhaven with first trams due to run in public service in 2023.

The decision was made after a lengthy debate at the full council meeting with each of the 62 councillors given the chance to put their point across. Most of this was as expected with Labour and the Scottish National Party councillors (who are in coalition leading the council) in favour of the plan and the Conservatives and Liberal Democrats against (although for the Lib Dems this wasn’t a definite no it was more a wait and see no). It was always going to be a case of waiting to see where the Greens went and in the end they came out in favour of the extension which helped to sway the decision in favour of the affirmative. When it came to the vote – which was on a roll call basis which meant each councillor’s name was called and then they had to say how they voted – 36 councillors were in favour of the motion giving a majority. Two amendments were also up for the vote; tabled by the Conservatives and Liberal Democrats these sought to reject the plan.

There is no denying that the decision to proceed will be seen as controversial to many in Edinburgh and the surrounding area. The original project to bring trams back to the city was mired in controversy with overruns both in time and budget and this remains clear in the mind of many. A Public Inquiry – led by Lord Hardie – is still ongoing with a report due to released at some point in the future; this report will show what went wrong and give lessons to be learned but these now won’t be able to be included in the extension from the start.

Concerns have also been expressed over the inevitable disruption the construction of the extension will generate with fears that traffic will be forced into side streets adding to congestion and pollution there. Some are also worried about the disruption to businesses along Leith Walk but a comprehensive package of support is included in the overall budget for those affected. The budget provided for the extension is also mentioned by many of those against with concerns that it won’t be sufficient considering how big projects in Scotland have gone recently but the City of Edinburgh Council remain convinced the project is fully affordable and the only reason the budget is so high is because of possible overruns.

Before the council meeting began a small group of protestors – around six or seven if footage on social media is to be believed – met outside the council offices but this didn’t cause any councillors to change their minds which had only been made (as they normally are in circumstances like this which makes you wonder why they go through the lengthy debate!)

With approval now given the project will begin at the end of March with a six month Early Contractor Involvement period where the two contractors (Sacyr, Farrans, Neopul Joint Venture for the Infrastructure and Systems Contract and Morrison Utility Services Ltd for the Swept Path Contract) will work closely with the Council and other key stakeholders to finalise plans for construction. Once this is over construction work will begin in earnest and it is planned that the first passengers will be able to travel to Newhaven in early 2023 following a period of testing and commissioning. The work will take place under an one dig approach where all work – including archaeology, pre-infrastructure and construction – will be completed as part as one worksite closure thus helping to reduce disruption.

The 2.8 mile extension will run from York Place to Newhaven with new stops constructed at Picardy Place (which will replace the York Place stop), McDonald Road, Balfour Street, Foot of the Walk, Constitution Street/Bernard Street, Port of Leith, Ocean Terminal and Newhaven. It is also planned to have a small stabling area for trams at Newhaven which will help to ensure a good early morning and late night service can operate. It is expected that almost 16 million passengers will be carried on the extended tramway in its first year.

Cllr Lesly Macinnes, Transport and Environment Convener, said: “This is a crucial decision for Edinburgh – for today’s residents and for generations to come. Taking trams to Newhaven will allow brownfield development sites to be transformed, opening up the whole of north Edinburgh to a wealth of opportunities in terms of jobs, housing and local facilities. And vitally, this will be achieved without putting pressure on existing Council budgets. Our city is growing faster than anywhere else in Scotland – a sign of our continued attractiveness as a place to work, live, visit and spend time – and boosting our public transport infrastructure in a sustainable way is fundamental to catering to our expanding population. I firmly believe the tram project is in the best interests of the city’s current and future residents and, as an Administration, we will do everything in our power to make sure it’s delivered on time and on budget. Next stop: Newhaven!”

Cllr Karen Doran, Vice Transport and Environment Convener, added: “Connecting the people of Leith, Newhaven and north Edinburgh to major employment and leisure hubs through trams will boost the area enormously – socially, as well as economically. And for our city’s top employers, giving them a safe, reliable, accessible and mass transit public transport link into one of Scotland’s most densely populated areas has got to be a winner, hugely expanding their recruitment pool. We couldn’t simply have stood still – the challenges of population growth coupled with the pressing need to improve Edinburgh’s air quality compel us to act. I am very grateful to everyone who’s contributed to the Final Business Case for their help in getting us to this point, from residents and businesses who gave up their time to feed into our public consultation to the extremely hard-working project team who put the case together and guided councillors through it as we prepared to make this decision.”

Of note some external organisations also came out in support of the extension. Paul Tetlaw, from Transform Scotland, said: “We fully the support the scheme to extend the route to Newhaven – this will serve a key transport corridor and boost development in the city creating more sustainable travel patterns. Cities around the world – many much smaller than Edinburgh – are developing and expanding light rail systems. They can efficiently transport large numbers of passengers on key transport corridors and help to maintain and enhance town and city centres. Electric power means there are no emissions at the point of use and so air quality targets are more readily achieved. In the UK Nottingham, Birmingham, Manchester and Blackpool are all extending their systems and across the water Dublin is doing likewise. Edinburgh’s initial tram route has been a great success, it has consistently outperformed passenger projections and there is ample evidence that it has encouraged motorists to leave their cars behind and take the tram into the city.”

Whilst Andy Keba, Head of Strategic Partnerships, Sustrans Scotland, commented: “Sustrans welcomes the decision of the Council to move forward with a tram route design that recognises the importance of this project in enabling more active travel journeys. We look forward to the completion of segregated cycleways along the length of Leith Walk and improvements throughout the scheme for people travelling on foot. We are further encouraged to see the commitment for supplementary active travel improvements to be funded from the Place capital programme budget and delivered in parallel with the tram project.”

The Trams to Newhaven project has now been approved but that doesn’t mean that the work is over, far from it. As well as sorting out the final costs between the various parties involved ahead of construction starting there is also the small matter of finalising the £2.4 million package of support for businesses along the route. The project team are due to update on this support later in the spring.

It’s has been a long time getting here but finally the plans can become a reality and Newhaven can be linked to the city centre by an efficient and green transport system. There may still be a few bumps in the road but hopefully lessons have been learnt and this part of the project will go a lot smoother than the original tram construction! 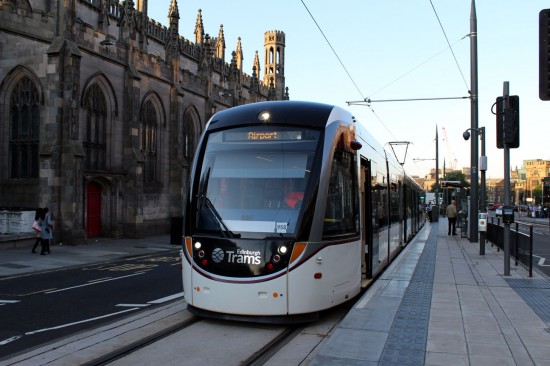 Terminus no more! Well in four years anyway. With plans now approved to extend Edinburgh Trams to Newhaven the stop at York Place will be removed and replaced by a new one around the corner in Picardy Place. On 4th July 2015 we see 257 standing at York Place. (Photograph by Gareth Prior)

6 Responses to It’s a yes! Trams will go to Newhaven after approval given to extension