Posted on Friday 1 February 2019 by Gareth Prior

If the news that Manchester 765 was to visit Beamish in time for April’s Great North Steam Fair wasn’t enough to persuade you to make a visit how does it sound if you added Blackpool & Fleetwood Box 40 to the offering? Well, that is exactly what is happening with 40 set to leave Blackpool for the last time for a loan period until August – and it will then head to Crich in plenty of time to play a starring role at the 60th anniversary celebrations there in September! It has been confirmed that the tram will be leaving Blackpool permanently (well, at least for the foreseeable future anyway) and will remain at Crich following its arrival there after its spell at Beamish comes to an end. Box 40 has been one of the better travelled trams in preservation and Beamish will become its fourth different tramway it has operated on – bringing it level with Blackpool Pantograph 167 (Beamish, Blackpool. Crich and Gateshead Garden Festival) and Manchester 765 (Beamish, Blackpool, Crich and Heaton Park) as the trams which have run on the most different tramways in the preservation era. 40 has previously run at Blackpool (extensively!) and Crich (1964-5 and briefly in 2014) as well as a period on loan at the Heaton Park Tramway in the 1980s but this will be the first time it has gone to Beamish where it will be the fourth tram from the national collection to operate there (following in the wheels of Cardiff 131, Blackpool Pantograph 167 and Glasgow 1068).

The current plan is that 40 will make the road journey from Blackpool across to the northeast in early March. This will allow time for the tram to be recommissioned and also allow familiarisation for Beamish’s own engineers and tram drivers before it enters service in time for the Great North Steam Fair, taking place between 11th and 14th April.

It is due to stay at Beamish until the end of August and if its spell of operation in the northeast wasn’t exciting enough it will then return to Crich where it is planned to be in service by the time of the 60th anniversary event to celebrate the discovery of the old quarry that has now become home to the National Tramway Museum. This will be the first time since 2014 that 40 will have run at Crich and the tram was one of the very first electric trams to run at the museum in its early days in 1964-5. For a tram owned by the Tramway Museum Society and which has run extensively elsewhere over the years it seems remarkable that these have been the only two previous periods of operation at Crich but this time it will be sticking around for a bit longer as it has been confirmed that its loan period in Blackpool (due to end at the end of 2019 anyway but cut slightly short to accommodate this loan to Beamish) will be coming to an end. Although it will be met with disappointment by some that 40 will no longer be in Blackpool it should be remembered that it has had a good period of operation there and it is now time for the next stage of its preservation career to get underway at what is, after all, its home tramway.

Laura Waters, Curator at the National Tramway Museum, said: “We are really pleased to be working with Beamish again, to lend them Box 40 for the Great North Steam Fair. The event will be a great opportunity to see the tramcar operating with other heritage vehicles and we are especially pleased that it will again operate alongside Manchester 765 which is also visiting from the Heaton Park Tramway. With the tramcar staying until late August, it means lots of visitors to Beamish will be able to ride on this special tramcar, and we are always looking for ways to share the National Collection with as many people as possible, to celebrate the country’s tramway heritage. We’d like to thank Blackpool Transport Services who have looked after the tramcar whilst on long term loan to them.”

Matt Ellis, Keeper of Transport at Beamish, added: “Our Great North Steam Fair over 11th-14th April will showcase a wide variety of transport exhibits in operation around our extensive site. It is excellent that we can once again work with the National Tramway Museum for one of their exhibits to take part in the event. The ability for Box 40 to stay until late August will bring variety for our regular visitors for the summer season.”

After a couple of years where the number of trams available for service at Beamish has been at a fairly low level the loan of both 40 (until August) and 765 (until June) will help to give plenty more variety of trams available to transport visitors around the site – and if that isn’t a good enough reason to visit then what is! 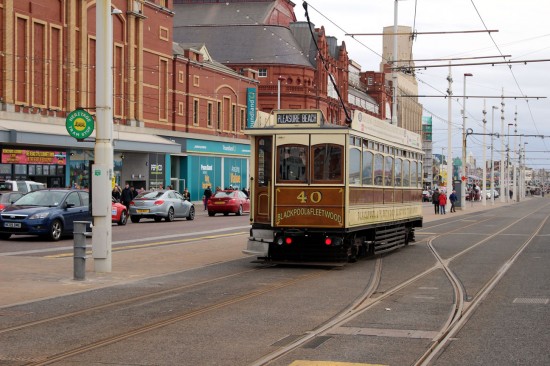 The familiar surrounds of Blackpool for Box 40 on 22nd September 2018 with the tram operating on Heritage Tram Tours with a service to Pleasure Beach in a view at North Pier/Tower. Sights such as this will no longer be seen once the tram heads off to Beamish in early March. 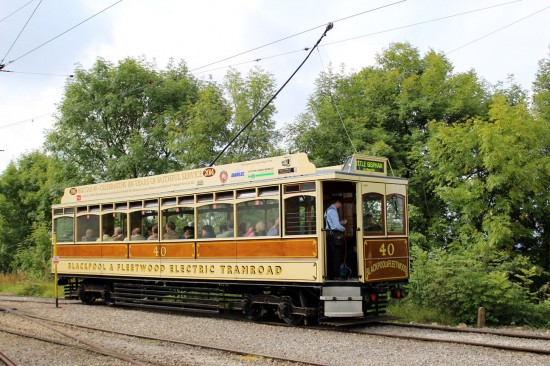 40 is seen at Crich the last time it was in Derbyshire. This is Glory Mine on 13th September 2014. (Both Photographs by Gareth Prior)