Posted on Friday 18 January 2019 by Gareth Prior

West Midlands Metro now has a third named tram following the naming of 31 Cyrille Regis MBE at a special ceremony on Friday 18th January. As we reported back in December the tram was to be named after the West Bromwich Albion legend who sadly died in January 2018 and is said to be a pioneer for black footballers in the game playing 297 times for the club, scoring 112 goals between 1977 and 1984 before moving on to other clubs.

Many special guests were invited along to the naming ceremony including members of Cyrille’s family plus former team mates, including Brendan Batson, and local dignitaries. The day started at 1035 for these guests at The Hawthorns tramstop – The Hawthorns, of course, is where WBA’s stadium can be found – where they boarded a tram for the trip to Wednesbury Great Western with the naming ceremony taking place within the depot confines. After speeches 31 was then driven slowly outside of the main depot building showing its newly applied name – Cyrille Regis MBE 1958-2018. The guests were then able to board the tram for a trip back to The Hawthorns where they then headed off to the football ground for a reception (after photos that was!).

Cyrille’s widow, Julia said: “I believe Cyrille would have been quite surprised to have a tram named after him but equally I think he would have felt humbled and honoured especially as the Cyrille Regis tram will be carrying thousands of fans of his beloved West Bromwich Albion to the Hawthorns for many years to come. As a family we are saddened that he is not here with us to enjoy this wonderful tribute, but proud to accept it on his behalf.”

The name on 31 is in a revised position to those carried on the other named trams in the fleet with it being carried above the windows on the end section of the tram. For this tram in addition to the actual name there is a silhouette image of Cyrille celebrating scoring a goal which goes from top to bottom of the tram, partially covering the window.

With this being the third of the Urbos 3 trams named – the others being 35 Angus Adams and 37 Ozzy Osbourne – Transport for West Midlands have also announced plans to name further trams later this year a possible public vote to take place. 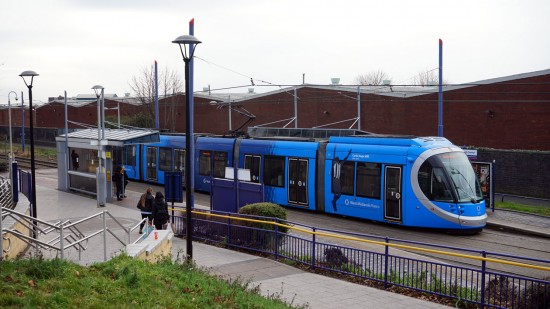 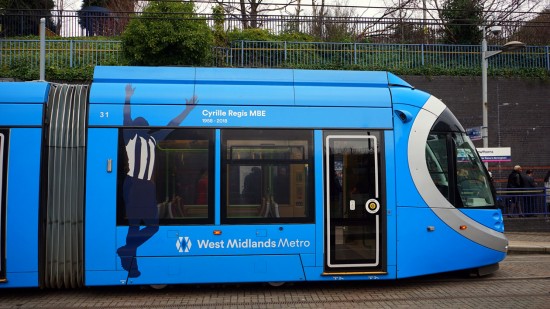 A close-up of the name and silhouette image at one end shortly after the tram arrived at The Hawthorns with guests alighting. 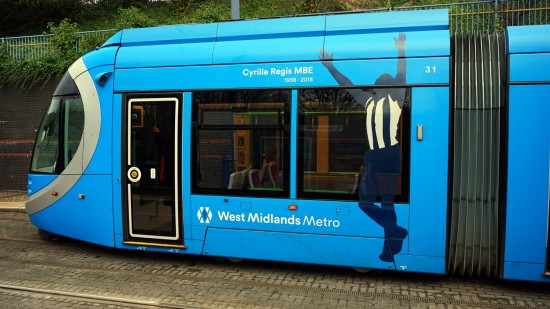 Both ends have had the name applied. 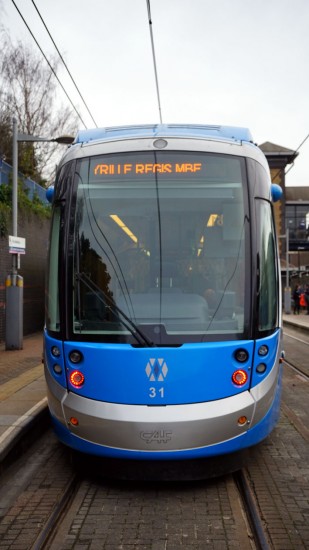 The special also had a special destination with the tram saying “CYRILLE REGIS MBE”. (All Photographs by Andy Walters)

One Response to In Pictures: 31 named Cyrille Regis