Posted on Thursday 29 November 2018 by Gareth Prior

The final edition of Picture in Time for 2018 sees us heading to South Yorkshire once more for an image taken in the formative days of the system of Nunnery Depot.

Nunnery Depot was built for the opening of the Supertram network on former railway land – with the national railway network just running past the tramway at this point. Before the depot was built it had been used as carriage sidings with a previous use also seeing it as Nunnery engine shed. The depot is on 6.4 acres of land and consists of a standard arrangement with covered accommodation and ample sidings for the trams in the fleet.

This photo shows a general view of Nunnery Depot with one tram visible in the main building and a large number of other trams in the sidings to the right. Image taken on 12th August 1994 at which point only the section between Fitzalan Square and Meadowhall was in operation. 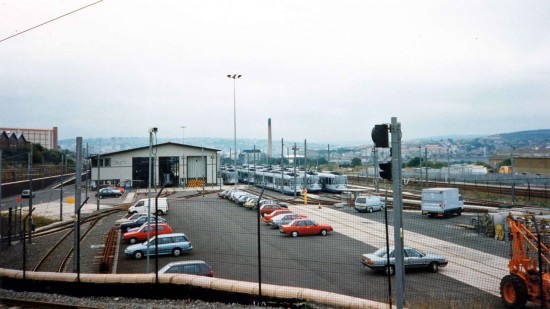