It is a tram which provided a mystery as to just where it had come from in the initial stages of restoration at the Ipswich Transport Museum but Cambridge Street Tramways 7 is now approaching the end of its work ahead of display at the museum, complete with the obligatory fake horse as all horse trams seem to be partnered with!

Since we last featured the tram it has received seats on the upper deck, the dash panels have been installed on the ends (complete with fleet number) whilst upper deck decency panels have started to be fitted. The remainder of the upper deck panels will follow once signwriting has been completed along with the last of handrails. We are sure you agree the tram is looking absolutely stunning and will be a very welcome addition to the ranks of preserved trams when it is put on full public display at its Suffolk home.

* To find out more on the history of the tram please read our article from October 2013. 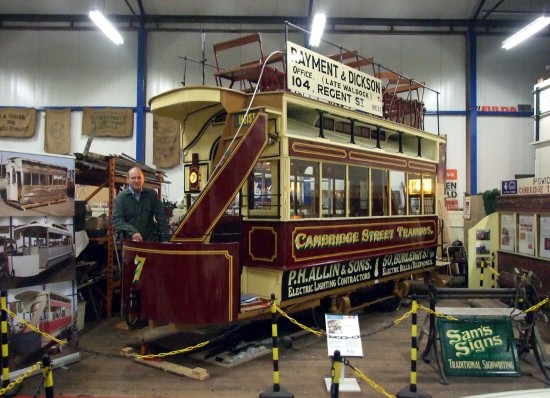 7 at the Ipswich Transport Museum on 18th November showing the current state of the restoration. Standing by the front platform is Tony White, one of the museums volunteers who has been responsible for all the new woodwork and restoring that which was salvageable from the original framing. Also note the pictures to the left of the image showing the various stages of the restoration which really do show how much progress has been made. (Photograph by Stephen Cobb)