Posted on Tuesday 23 October 2018 by Gareth Prior

Today’s delve into the archives heads into the mid 1980s for another photo from Blackpool showing one of the many colourful all over adverts carried on the trams.

This is Blackpool Brush 634 which at this time was in a joint advert for Blackpool Zoo and the Derby Baths using pastel colours but the combination led to a nice and colourful livery which was carried on this tram for a couple of years from 1984 until the end of the 1985 season. This photo was actually captured in the second of those two seasons with 634 heading all the way south to Starr Gate as it travels along Central Promenade. This was the third advert to be carried on 634 and in total by withdrawal it was a tram which would see eight different advert liveries. Today the tram is back at Rigby Road waiting workshop space for the completion of work to bring it back to service. 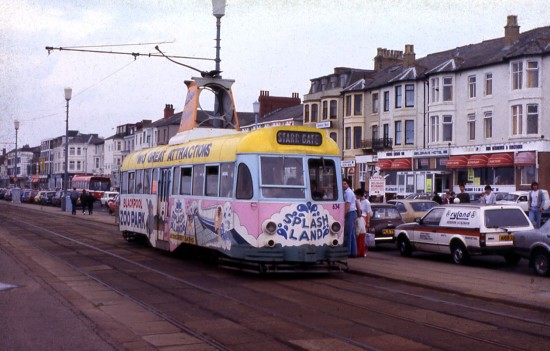