In Pictures: Sneak peek of new destinations for Tram-Train service

Posted on Thursday 18 October 2018 by Gareth Prior

With the shadow running for the full introduction of the Tram-Train service between Sheffield and Rotherham continuing ahead of the start of services on Thursday 25th October a sneak peek has been seen on the destinations – including the route code.

On 12th October 399 201 was on the shadow service – which runs as the service will but without any passenger carrying – and was spotted showing the destination Rotherham Parkgate. With it looking like there will be no route colour for the service, the section of the destination screen which usually features the colour states “TT”.

Meanwhile Stagecoach Supertram have also announced that there will be some minor timetable changes to the Blue, Purple and Yellow once the Tram-Train service starts. Full details of these changes haven’t yet been announced for the Blue and Yellow routes – save for the statement “some minor changes to the timetable to accommodate the Tram-Train service”. However, it has been confirmed that on the Purple route there will be earlier departures from Herdings Park and Gleadless Townend on weekdays to allow for morning peak traffic congestion and on Sundays the route will only run between Herdings Park and Cathedral bringing an end to this route running to Meadowhall (of course, previously during the day on weekdays and Saturdays the route also ran to Meadowhall before being cut back during a tram shortage a few years ago). 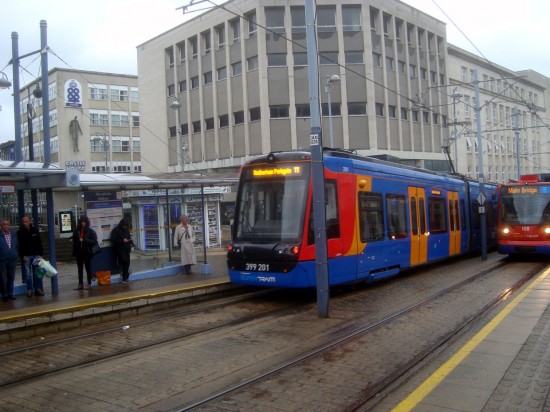 399 201 shows off the “TT” Rotherham Parkgate destination at Castle Square. 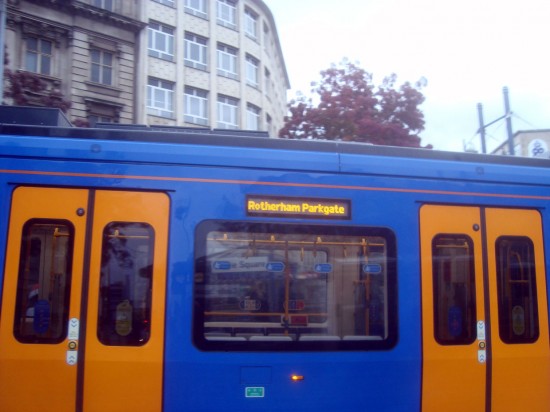 A close-up of the side destination showing Rotherham Parkgate. (Both Photographs by Stuart Cooke, 12th October 2018)