Posted on Tuesday 9 October 2018 by Gareth Prior

Another look at one of Blackpool’s illuminated feature cars in this edition of Picture in Time and this time around it is probably the most popular of all – the Western Train.

The third of the feature cars to be constructed in the late 1950s/early 1960s the Western Train was originally built using Railcoach 209 (Locomotive) and Pantograph 174 (Carriage) and entered service during the 1962 illuminations joining the Blackpool Belle and the Rocket in operating tours. It became firmly established in service each year carrying on as part of the operational fleet until 1999 when it as officially withdrawn from use at the end of the illuminations. But for the Western Train that was not to be the end of the story as thanks to funding from the Heritage Lottery Fund it was to be fully restored to service. This saw the Locomotive (with Twin Car Trailer 677’s frame used) and Carriage returned to action in time for the 2008 illuminations. The pair have remained in service for each illumination season since. 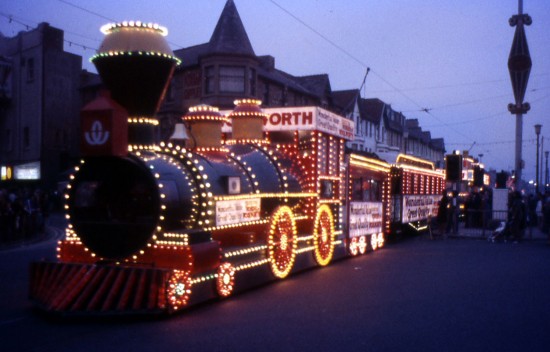