The biggest event for Blackpool Heritage Tram Tours each year takes place on the third weekend of September – the Anniversary Spectacular. As usual the 2018 event saw an intensive tram service – including non-timetabled specials – across the whole of the tramway plus depot tours, trams on display at Rigby Road Depot and for those so inclined free bus tours around the local area. Read on to find out more of what happened over the weekend…

After Storms Ali and Bronagh had done their worst in the period leading up to the weekend – with Blackpool hit by heavy rain on Thursday 20th and strong winds on Friday 21st – Saturday 22nd September was a dry if not a little chilly day – so just the weather for an Open Boat car ride! 600 was one of the trams which left depot for service and its first working was to Thornton Gate and back to Pleasure Beach – nothing better to blow away those morning cobwebs than an open tram ride on the cliffs north of Cabin!

Of course, 600 was not the only tram in service with a further 10 heritage cars out to operate the main service. As has become traditional with this event two trams are dedicated to the full length service between Starr Gate and Fleetwood and on this day these were Balloon 717 and Brush 621. Other trams in service were Box 40, Standard 147, Brush 631, Centenary 642 and Balloons Cars 701, 715, 718 and 723.

Away from the main heritage service and Balloon 719 was in use on the depot shuttles. With behind the scenes tours taking place at both Rigby Road and Starr Gate depots 719 was used to ferry participants between the two – running from Hopton Road to Starr Gate via the crossover at Foxhall. Those who were enjoying the depot tours could also ride on the tram into the actual depot complex at Starr Gate.

Speaking of depots and at Rigby Road there were two line-ups of non-operational trams. On Blundell Street along the Fitting Shop wall could be found Open Top Balloon 706, Balloon 703 (still in its guise at Sunderland 101) and Brush 634 whilst on the actual depot fan was Jubilee 761 and Halle 902 with Engineering Car 754 also posed alongside for a time.

On both days of the weekend one further tram was also out on the tramway with Balloon 711 in use as the Shop Tram at North Pier with plenty of gifts available from within the tram.

This first day of the event was incredibly busy with many visitors enjoying rides on the trams. Indeed, there were some journeys which were completely at capacity with some expectant passengers having to be turned away from some services as there were just no spare seats!

Onto day two – Sunday 23rd September – and despite forecasts earlier in the week of rain it was a mainly dry day. Although it didn’t seem to be as busy a day there were still many healthy passenger loads throughout the day with a similar mix of timetabled services and special workings running on the tramway.

Depot shuttles were due to be in the hands of B fleet Balloon 713 but this suffered a fault on its first trip and had to be towed back to depot by Unimog 939. Its place was taken by fellow B fleeter 719, resuming its role from the previous day.

The two line-ups at Rigby Road saw Open Top Balloon 706 again displayed on Blundell Street – this time with a Fylde Tramway Society stall to assist with the appeal to restore the tram to service – with OMO 8 and Brush 632 for company. Then on the depot fan it was Jubilee 761 again with Brush 631 and Coronation 304 also on display.

As the day drew to a close, trams started to return to Rigby Road Depot. Well, at least they attempted to at any rate! With the wind blowing sand onto the Prom the points at Manchester Square were unable to move to allow trams access to Lytham Road for the depot. After several aborted attempts Balloon 718, Centenary 648 and Balloon 700 all gave up and returned to Pleasure Beach. Thankfully an intrepid volunteer guard managed to get the points to change to enable trams to get back to depot and all of the three which had returned to Pleasure Beach eventually came back. Blackpool Transport engineers also arrived to solve the issue once and for all with a leaf blower used to get the sand out of the mechanism.

For those Blackpool based enthusiasts – and those who stayed on for the night – the weekend was capped out with Sunday evening seeing three Purple B fleet Balloons on Illumination Tours – 700, 711 and 719. All operated just the one tour (alongside the Western Train and the Frigate – the Trawler was on a Private Hire) but it was a fine way for the busy weekend to end.

Overall the weekend seemed to be another successful one for Heritage Tram Tours with incredibly healthy passenger loadings – especially on day one. Its probably true to say a bit more imagination could have been used with the tram line-ups at Rigby Road with the actual depot fan line-ups seeing Jubilee 761 on both days and operational Brush 631 used on the second day but that is just a minor point on a well organised weekend. There will be many who point towards the lack of the “wow” factor of a new tram in service but as enthusiasts who follow every movement of the Blackpool Tramway it is easy to forget that since last September’s spectacular there have in fact been two returns to the heritage fleet – Standard 147 and Centenary 642, both of which have new looks since their last use on the tramway (and let’s not forget that for some an annual visit is all they can make to Blackpool – if even that frequent). With the workshops set to be a hive of activity over the next few months – including the resumption of work on Standard 143 which, as part of an agreement between BHTT and the Fylde Transport Trust, should return to service next year – it would seem that 2019’s event could be even better! 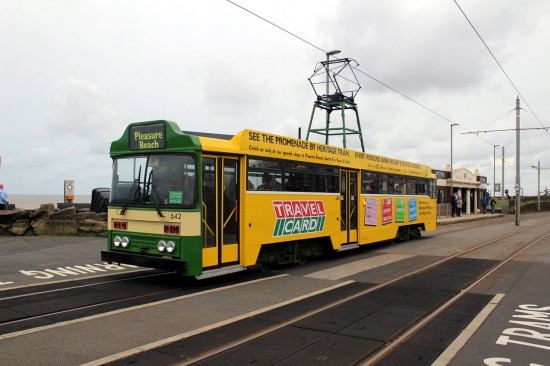 Centenary 642 pauses at Bispham with the first northbound journey of Saturday 22nd September. 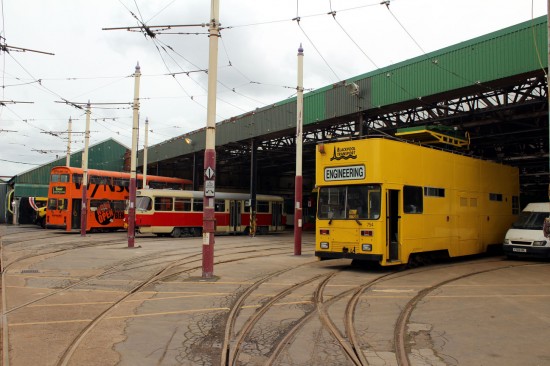 Down at Rigby Road Depot on the Saturday and a line-up on the depot fan featuring Jubilee 761, visiting Halle 902 and Engineering Car 754. 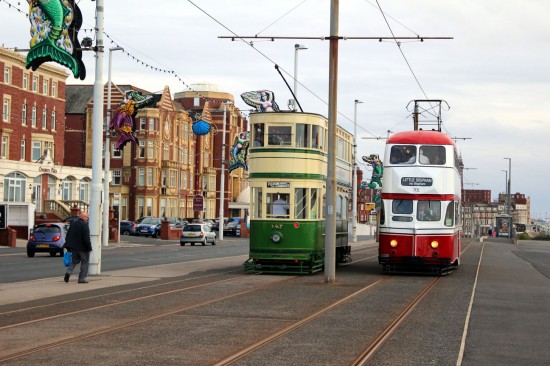 Standard 147 and Balloon 701 pass close to the heritage stop at Cabin on Saturday 22nd September. 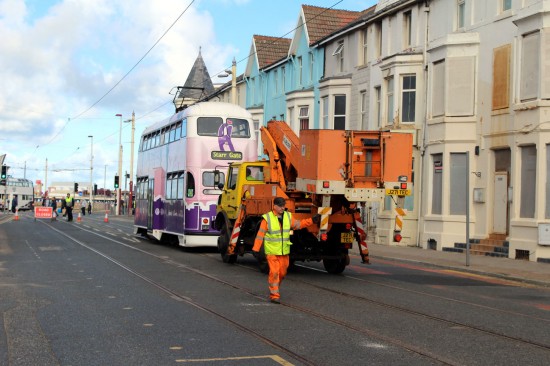 On Sunday 23rd September and Balloon 713 was towed back to depot by Unimog 939 after suffering a fault. With the Prom road closed owing to a Running and Music event this part of Lytham Road was unusually quiet enabling uninterrupted views of the ensemble returning to depot. 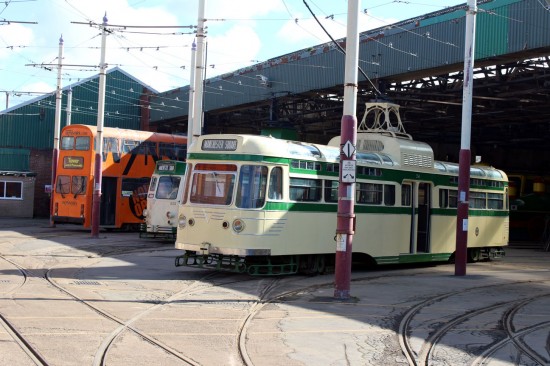 And the Sunday line-up on the depot fan once again featured Jubilee 761 with operational Brush 631 in the middle and always popular Coronation 304 nearest the camera. 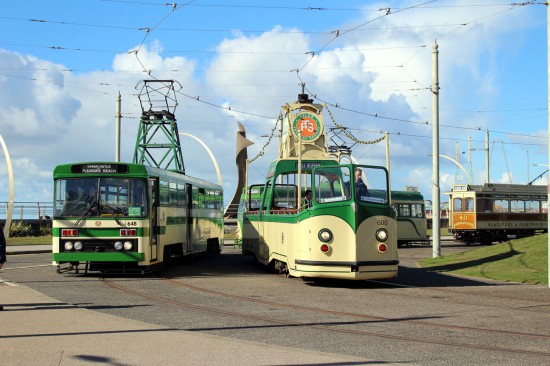 Always busy on Pleasure Beach loop during the September Spectacular event. In this Sunday 23rd view we see Centenary 648 and Boat 600 to the fore. (All Photographs by Gareth Prior)