In Pictures: Concrete base laid for North Station extension

Posted on Wednesday 4 July 2018 by Gareth Prior

The project may be delayed and it is likely to be quite some time before we can all enjoy a ride along Talbot Road to Blackpool North railway station but visible progress is now being made on preparing the surface for the laying of track in the future.

Anyone who has been to Blackpool in recent months will be well aware that large sections of Talbot Road have been closed to traffic to allow preparations to be made for the tramway and these preparations have now reached a stage where the concrete base is being put down ahead of the installation of the tracks.

It had originally been planned that trams would be running to North Station at Easter 2019 but with the site of the tram terminus still being occupied by Wilkinson’s – and with no closing date in sight for the store – this will now not be met. No official word has come from Blackpool Council as just when they will be opening the line. 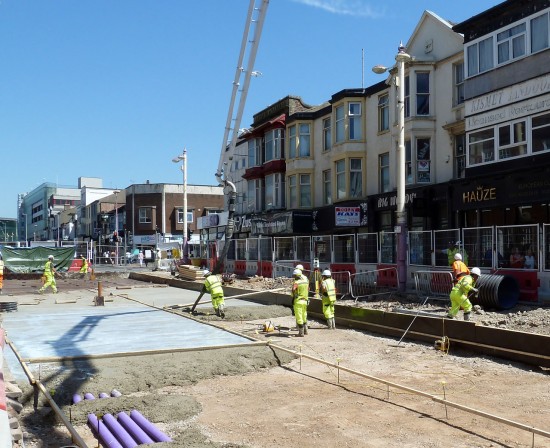 The concrete is poured onto the surface. 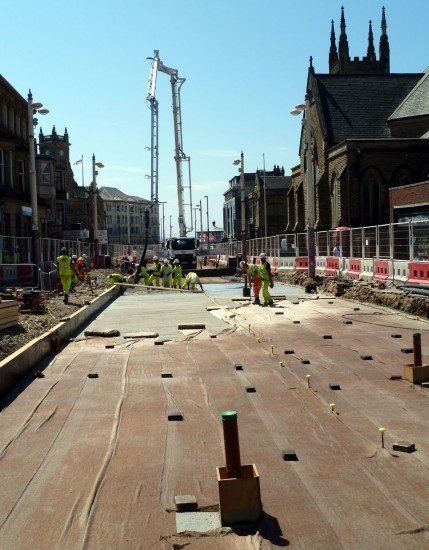 Another view of the worksite with the concrete being poured and then spread along the surface. Eventually there will be tram tracks running along here. (Both Photographs by Peter Dockerty)