Around the World in Trams Guide: Trams in Rome

Posted on Thursday 5 July 2018 by Gareth Prior

A bit of a change for our worldwide tram series this week as this is the first in a new occasional look at various tram systems from around the world from the view of a visitor to see just what there is to see and do with advice from those who have experienced it first hand! This is not intended to be a full history of the line or an indepth look at current operations but is a starting point if you are considering a visit to the respective cities. In this first edition Ken Jones reports on his experiences in Rome. If you would be interested in supplying similiar articles on other systems from around the world to help enthusiasts thinking of planning a trip please email us at gareth@britishtramsonline.co.uk.

My wife and I were in Rome in May 2018 and did the whole tramway system. I hope others will benefit from our experience. Public transport in Rome is great, and has trams, buses, metro and urban railways all using tickets bought in advance. You can buy a single trip ticket, 1 day, 2 days, 3 days or as we did a 7 day ticket from a local tobacconist shop or other outlet. You cannot buy tickets on the actual public transport. You have to validate the ticket on your first trip on the bus or tram. It is automatically verified for you if you use the metro first. You validate the ticket by putting it into the yellow machine on the tram [or bus] which date stamps it and also the time. It is illegal to travel with an invalidated ticket on the network and you can face an instant fine if caught. Cost of tickets are cheap so not worth the fine. Rome public transport carries many people mostly standing and trams are not used very much by tourists. We thought we had done quite a bit of preparation in the UK, but my advice is do a lot more before you go. This is because you just cannot get information as a visitor about the tram network which is just not part of the tourist agenda. We ended up taking a picture of the tram routes in a tram when in Rome – we should have printed a map off first – we did that for the metro but were completely underwhelmed by the lack of interest and information there is for visitors. In fact we found no magazines or books on trams or railways, not even at the main transport interchange / railway station known as Termini.

We also found nothing in a model shop we visited in the suburbs, nor at our hotel or tourist information. We were directed at the railway station to buy the complete massive public transport timetable all in Italian but you don’t need that, so we declined.

The trams [and buses] have people entering and leaving from many doors, queues is a word not used and expect to be viewed with astonishment by the locals who use the trams. Many tram drivers do not like their pictures taken and will hide their faces.

The system was once the largest in Italy and one of the biggest in Europe. What is left is a disjointed system running 4 types of trams. A good place to start is https://en.wikipedia.org/wiki/Trams_in_Rome which will give you some history and indication of what the system is like today. Route 19 is the longest whereas route 2 is the shortest. There are some 6 lines still running, but we saw much more track still left in situ under parked cars but the poles and wires of these other systems have long gone. Rome transport works like Paris, each tram / metro route has a different colour on maps and the destination is shown at the front of each tram. Note tram system not shown on metro maps and vice versa.

There are several tram maps on the internet but our hotel could not down load them for us even when they saved it as a PDF file, they couldn’t print it, so our choice is at https://www.rome.net/tram – click on the map and then download it, print it or save it. You will notice the one way section on line 2. Trams run from 5:30 am until midnight every day, like the city buses in Rome. At night, the trams are replaced by night buses. The system is operated by ATAC. A useful map can also be found at here. Note Line 8 was extend in 2013 to Piazza Venezia and some maps show it ending at Argentina.

The main depot is known as Caballini or Cavallini Depot at Via Prenestina under a triangular road flyover on the 5, 14, 19 routes. Don’t even try to go there. Not only are you not allowed in but they prevent you taking any pictures even from the road outside. If you don’t believe me take a look at https://www.flickr.com/photos/tramfan/21469708085/in/photolist-yHcSdM I don’t know if this is the only depot, as it’s a long way for trams on route 2 to get to. Perhaps there are stabling points, we certainly found another set of buildings further along the route heading out of the city which was tram connected but we didn’t even try to approach it.

Fortunately we had researched this before leaving the UK because there was nothing in Rome about it, including a total denial by hotel staff that it existed. Known as the Porta San Paolo Railway Museum the staff refer to it as the ATAC museum- they were not expecting us. A useful and perhaps only information about it is at https://en.wikipedia.org/wiki/Porta_San_Paolo_Railway_Museum.

It is housed next to the Roma Porta San Paolo railway station and the Piramide station of the metro (line B) and not mentioned anywhere it is also two minutes from tram line 3 at Piramide. The Piramide is a tourist attraction but the museum has no signage or publicity. There is a side entrance but that looked to be locked, but we could see someone there. We asked at the station ticket office and were directed to enter from the station. Fortunately our 7 day tickets gave us access to the station where we found an entrance to the museum, which seems to cater for school party visits. The staff having got over the shock of actual visitors gave us freedom to take whatever pictures we wanted to but asked us to stay away from the adjacent railway property and not take pictures of the suburban trains in the station. There was no charge for this museum.

We found this by accident when we were photographing trams at Porta Maggiore and noticed this line crossed a tram line at right angles. It’s a tram line to some people and a light railway to others. It has its own livery and rolling stock and should have been closed years ago with the construction of metro line c, but because that construction is running late the line is partly still in use. The depot is at Centocelle, but we didn’t attempt to visit it, although there is a preserved freight wagon outside which we saw from the train / tram. It is also described as an on-street narrow gauge railway which makes it a tram for me. I leave it for you to decide if it is a railway or a tram system. More information at https://en.wikipedia.org/wiki/Rome%E2%80%93Giardinetti_railway.

Maps of the line are present in its carriages but not on other trams, and vice versa. So print one of before you visit Rome would be my advice.

Because tourists don’t use the tram system in general the system is safe and free from things like pickpockets. You will have to take what the locals do with a pinch of salt and not get involved – easy for us we don’t speak Italian. We saw some women shouting at each other and fighting for a seat. We saw one lady throw her cardigan onto a seat from the door and then claiming the seat was hers, and best of all – perhaps it was our grey hair or the cameras, but many gave up their seats for us, and we always accepted. How long the trams will last in Rome is unknown – the system was going to be expanded – it has not been. Investment will be needed in replacement rolling stock but they might buy more buses instead. For those also interested in trolleybuses then also do route 90 which operates on batteries in the city centre https://en.wikipedia.org/wiki/Trolleybuses_in_Rome. 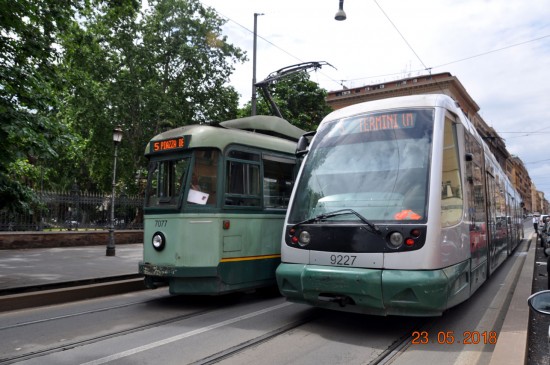 Two trams of differing varieties are seen here. On the left 7077 is of the ATAC Series 7000 which were mainly built between 1948 and 1949 but in this shot unfortunately it has broken down. It is joined by Cityway 2 9227 built by Fiat-Alstom. 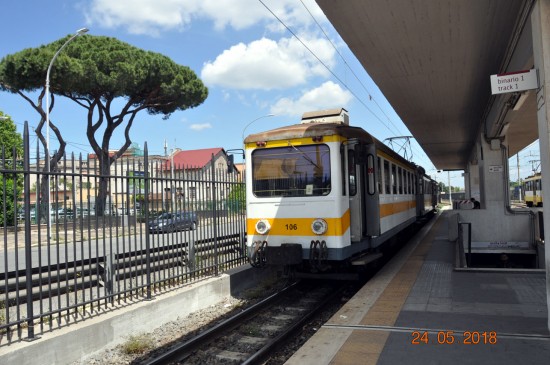 As described in the text the Giardinetti Railway is a cross between a tram and a train but is still light rail enough for inclusion. This shot shows 106 at Centocelle. 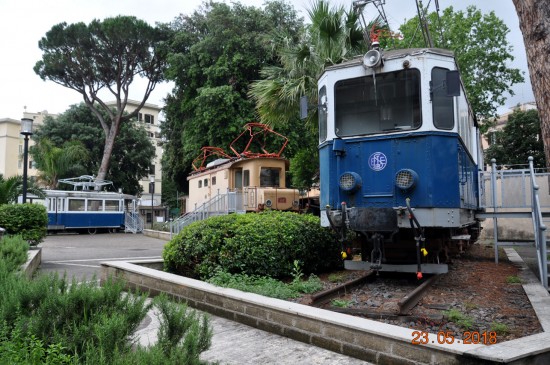 A general view of the Porta San Paolo Railway showing some of the exhibits. (All Photographs by Ken Jones, May 2018)

1 Response to Around the World in Trams Guide: Trams in Rome