London’s Docklands Light Railway is where we head to today for this instalment of Picture in Time as we take a look at one of the units which has carried an advert over the years.

This photo shows B92 67 (which is partnered out of shot by B2K 93) just as it approaches the platform at Limehouse on 12th March 2003. Rather than carrying the standard Red, White and Blue livery 67 has had an all over advert applied for London Docklands Jaguar – a livery it would carry for a couple of years. At the start of the 21st century it wasn’t uncommon for DLR units to receive adverts but in more recent times it has been very much the exception to the rule. In the background we can also see another DLR service heading off to either Bank or Tower Gateway. The tracks to the right are from the main line railway out of Fenchurch Street. 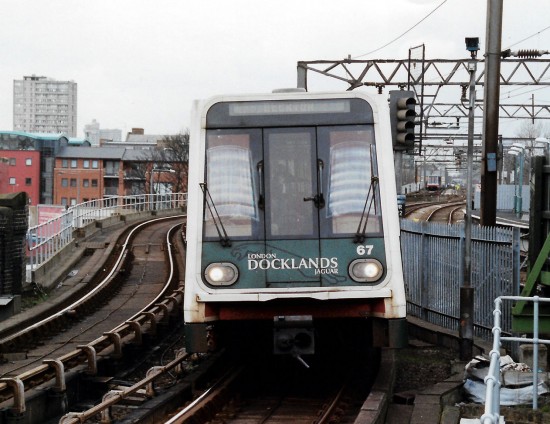