Posted on Thursday 3 May 2018 by Gareth Prior

Today if you think of Manx Electric Railway 7 you will probably think of the stunning Blue and White livery it currently carries but as our archive photo series continues we remember the time – not too long ago – that it was in far more standard colours.

One of six G F Milnes built Tunnel Cars, 7 was delivered to the Isle of Man in 1894 and was soon in use on the Manx Electric Railway running without too much fanfare for the best part of 100 years before it was captured on film at Derby Castle on 26th August 1992. In this photo we see the car in the pretty standard Red, White and Teak livery with the trolley already turned for a northbound trip which would seem to be operating without a trailer. In the background can be seen the remains of the ill fated Summerland complex whilst to the left the familiar look of the Terminus Tavern and ticket office can also be seen. Around this time 7 was regularly passed over to the Permanent Way department for use during the winter which eventually led the car to come into a poor state. This in turn did eventually mean it enjoyed a major overhaul and new paint job in time for 2013. 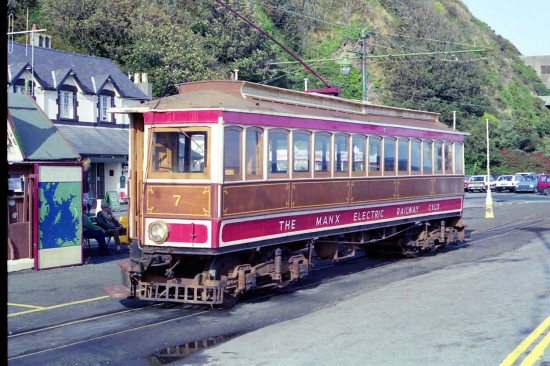