Picture in Time 1: Glasgow 1017 at Summerlee

Posted on Friday 26 October 2012 by Gareth Prior

The UK tram and light rail is continually changing and this new weekly series of photos seeks to show some of the things which have changed over the past few years across the country as well as showing some images of trams which do not regularly feature on British Trams Online. The first few weeks will feature photos sent to us by Gary Conn and will have a decidedly Scottish theme, starting off at Summerlee and a look at Glasgow 1017.

Glasgow 1017 was originally built in 1904 as an open top double decker and was part of the Paisley fleet numbered 17 before that undertaking was subsumed into Glasgow Corporation Tramways. This is when it gained its current number and a few years later a more drastic change happened when it was converted into a single decker – the condition it is in today. After withdrawal from passenger service it became a training car which is how it ended its life in service.  It did not immediately enter preservation but was sold as so many trams were at their end of their careers and it ended up in a garden in Cambuslang. It left this resting place in 1991 and was transferred to Summerlee where a full restoration into its single deck condition as 1017 was completed and it has now become the “workhorse” of the fleet. 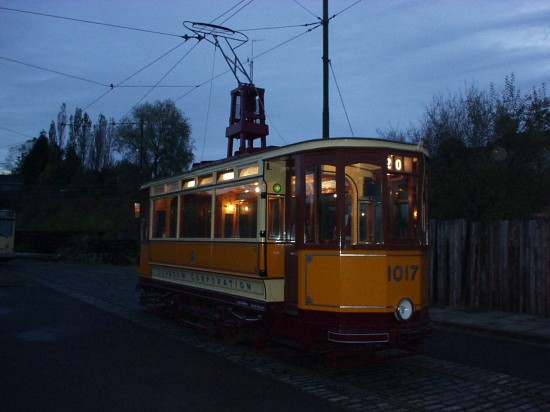