147 returns to use on the Blackpool tramway

On Saturday 31st March – the first day of the Easter ‘Gold’ operating weekend in Blackpool – Standard car 147 made its long awaited return to service after a period of two years away from its home tramway. The tram has received extensive workshop attention over the past year, including a full repaint which has seen a few livery alterations, restoring a livery not seen on any tram for a considerable amount of time.

It has been well documented that 147 spent a twelve month loan period at Beamish Museum commencing in March 2016. Following its return home, it was decided to undertake some major conservation work, including a much-needed external repaint, to return the tram to a condition more befitting one of the flagships of the heritage fleet.

147 has been superbly repainted in the 1930s variation of green and cream, which differs from its previous appearance most noticeably thanks to the addition of ornate ‘Blackpool Corporation’ lettering on the upper deck side panelling, as well as its fleet number in a roundel between the two words. The car also sports green fenders lined out in gold, whereas they previously painted white. It also appears to be sporting a slightly different shade of green, although as it debuted on a fairly dull day this may be exaggerated by the lighting conditions! The name ‘Michael Airey’, carried since 2006, has not been re-applied to the ends of the car.

In addition to its repaint, 147 has been fully re-varnished inside, and has acquired a full new set of ruby quarter glasses to replace several which had been damaged previously, as well as authentic new strap hangars and leather straps for standing passengers. The refreshed appearance was completed by a newly produced set of traditional black and white destination blinds, supplied as usual by Peter Watts. The end result is absolutely stunning and a credit to everyone involved in the project – in fact 147 probably looks better now than it did when first restored in Blackpool back in 2002!

147 is now scheduled to operate on Easter Sunday and Monday, 1st & 2nd April, and should then see regular use on heritage duties during the season ahead, and hopefully for many years to come. 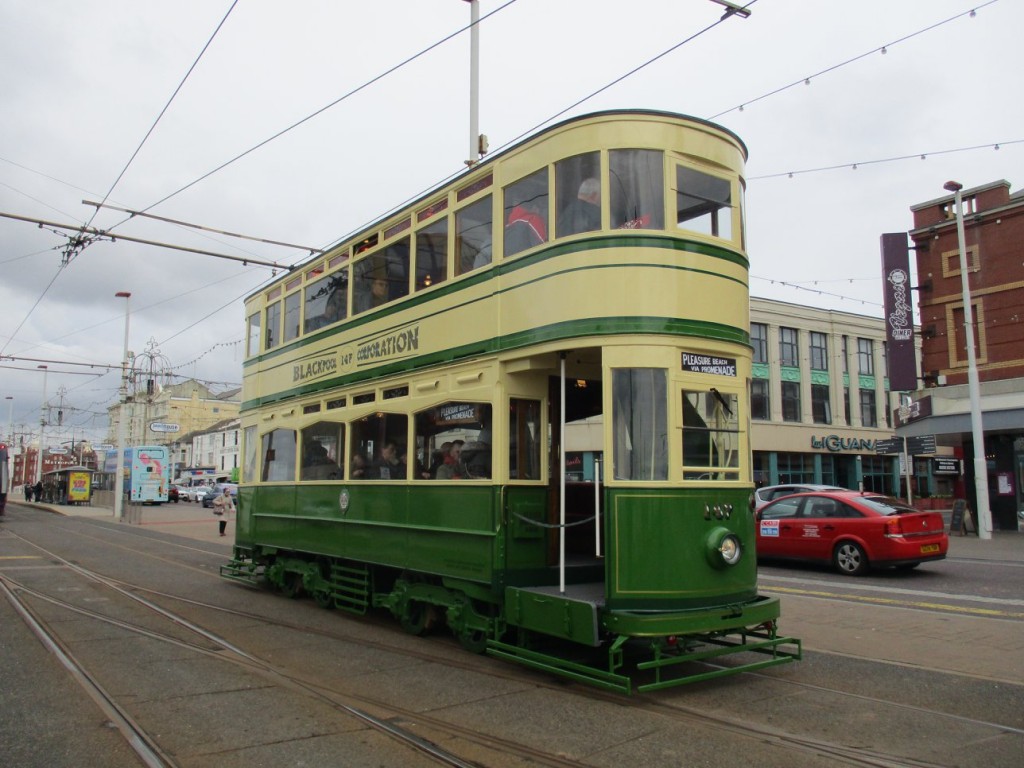 Standard 147 is pictured at the North Pier & Tower heritage stop on a southbound journey during its first day in service following workshop attention, and showing off the stunning 1930s livery complete with Blackpool Corporation lettering on the decency panels. (Photo by Rob Bray)

1 Response to 147 returns to use on the Blackpool tramway