We did say when we launched this series that in order to fit everything we wanted to in we would be cheating and that is exactly what we are doing today as we look at Blackpool Anniversaries. There have been two main anniversaries over the 15 years: the 125th and 130th anniversaries.

In 2010 the Blackpool Tramway reached 125 years and it was planned that there would be a week of events culminating on anniversary day itself with a full tram parade. This was before the tramway upgrade of course and so every tram running during the events would be a heritage tram but in order to enhance things it was planned that there would be numerous trams from across the UK which would visit. As we have seen in our tram loans series it didn’t quite go according to plan with double deckers from Crich not able to visit whilst the much anticipated loan of Blackpool Marton VAMBAC 11 from the East Anglia Transport Museum didn’t transpire. However, Liverpool 762 did arrive from Birkenhead along with Manchester 765 from Heaton Park, Marton Box 31 from Beamish and Rack 2, Pantograph 167 and Oporto 273 from Crich (the latter two of which took no part in events following failures). Even those trams which did come and weren’t declared failures didn’t see much use (it does make you wonder how much more use the trams would get if they were to visit Blackpool today!)

Despite those setbacks it was still an action packed week with Liverpool 762 proving itself to be the star of the show, turning head wherever it went. Each day saw either enthusiast tours or the “heritage” trams on specials with the weekend being a particular highlight whilst the use of Rack 2 on tours also proved to be popular especially as it had problems of its own which had threatened to rule it out of things as well. There was also a very popular depot open day including a tram shuttle from the depot to Bispham. The event week ended on anniversary day itself, 29th September, with an eight tram cavalcade running led by Rack 2 and followed by Box 40, Marton 31, Standard 147, Boat 600, Open Top Balloon 706, Coronation 660 and OMO 8. The OMO car was officially on test having arrived at Rigby Road from the LTT still requiring further workshop attention and it wasn’t confirmed until shortly before that it would be running at all.

So that was the 125th anniversary and you would have thought that the next big celebration wouldn’t be until 150 years, right? Wrong! In 2015 with Heritage Tram Tours starting to fully find their place on the tramway it was decided to celebrate the 130th anniversary with a spectacular event which would see the most intensive heritage service since the upgrade of the tramway operate. A two day event over the weekend closest to the anniversary this took place on 26th and 27th September and saw the return to service of two trams – Balloon 723 (a so called scruffy surprise having had advertising vinyls removed) and Twin Car 675+685 (freshly repainted in green and cream with orange trolley tower). In total 12 different trams ran on the Saturday with a 13 tram service on the Sunday in what would become a familiar pattern of operation over the next couple of years as this event became an annual one as an Anniversary Spectacular. Other familiar aspects were behind the scenes tours at both Rigby Road and Starr Gate Depots and tram line-ups on the depot fan and along Blundell Street. It wasn’t as big an event as previous anniversaries but it was the start of a new era in heritage operations in Blackpool which has been repeated every September since. 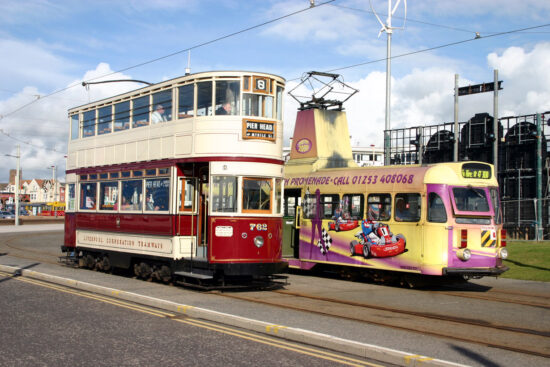 Liverpool 762 sits on Pleasure Beach loop alongside Brush 630. The Brush Car is now as much a heritage tram as 762 being part of the national collection. 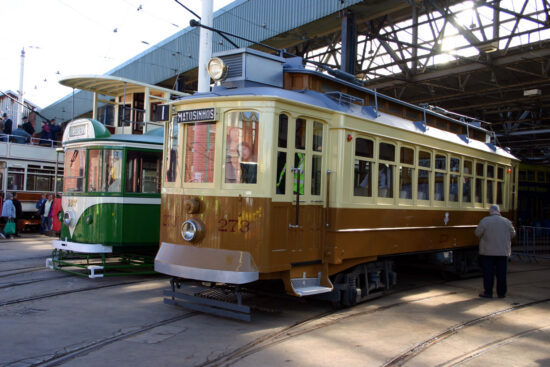 The depot open day gave the chance to see both withdrawn trams and those visiting for the events. In this view we see two trams from Crich which were unable to play a part in the celebrations: Pantograph 167 and Oporto 273. 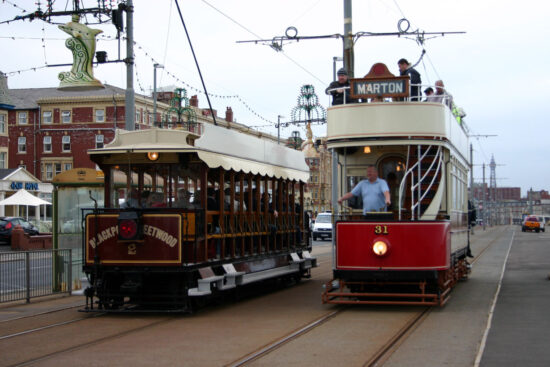 At Cabin where two visiting trams pass when on an enthusiast tour: Rack 2 and Marton Box 31. 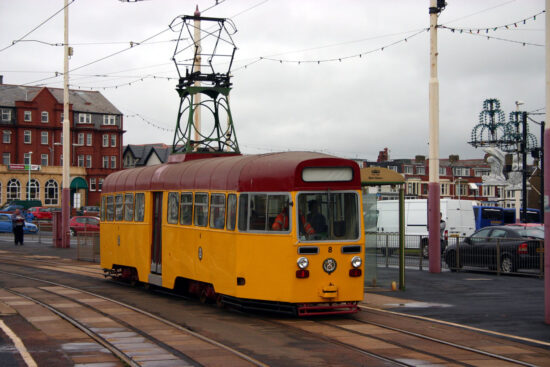 On 29th September 2010 and the actual 125th anniversary saw a Cavalcade of trams which had OMO 8 at the rear, a late addition on test. We see the return Cavalcade here at Gynn Square. 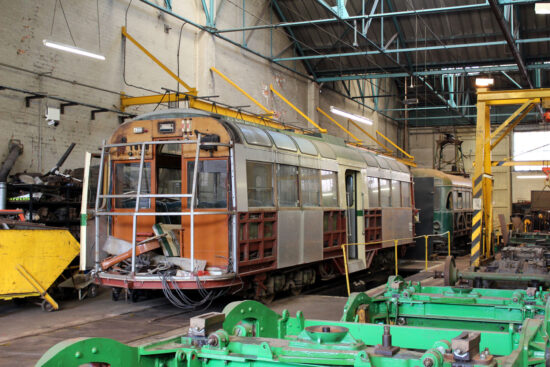 During the 130th Anniversary the chance was given for behind the scenes tours of Rigby Road and Starr Gate Depots. At Rigby Road numerous trams were displayed in the various shops including Railcoach 279 and Works Brush 259 in the Fitting Shop. 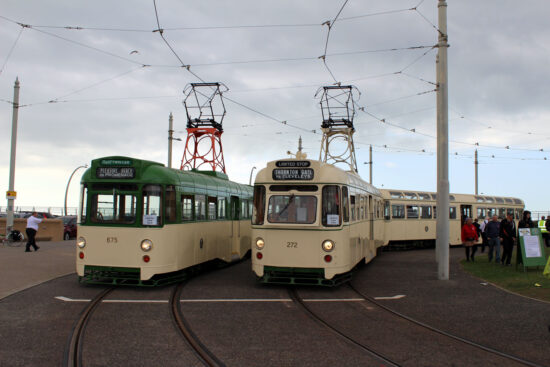 Returning to service over the weekend in fresh coat of green and cream Twin Car 675+685 is seen alongside sister set 272+T2 at Pleasure Beach. 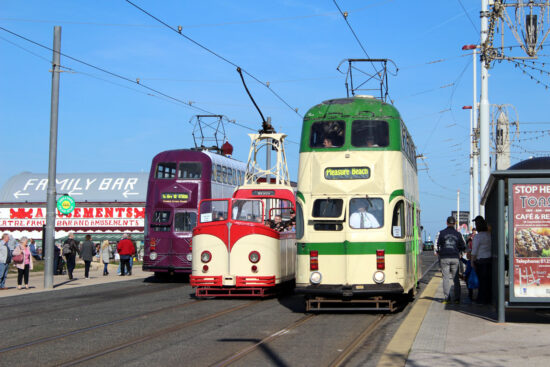 The scruffy surprise, Balloon 723 arrives at North Pier passing Boat 227 and Balloon 719 (in use as the shop). (All Photographs by Gareth Prior)