Posted on Wednesday 29 November 2017 by Gareth Prior

The sight of trams running along Bilston Road is set to become a regular feature once again with the track relaying project rapidly approaching a conclusion. The road will be reopened to traffic from Saturday 2nd December after which time full tram testing will also get underway but these will not be the first trams to traverse the new track as Urbos 3 18 – the one example fitted with batteries so far – was used on an initial run in the early hours of Wednesday 29th November.

As we have been illustrating throughout the long period of five months the complete track along Bilston Road between Priestfield and The Royal was ripped up and replaced with the trackbed also worked upon whilst a new junction was also installed further along the line to eventually allow trams to run through to Wolverhampton Railway Station. Excellent progress has been made in recent weeks which has allowed the project to get ahead of schedule and the road will now be reopened earlier than planned with a full service resuming from Sunday 10th December (subject to the usual caveats following the successful completion of testing).

It was shortly after midnight that 18 started its slow speed run along Bilston Road – which remains closed to traffic for a few days yet – to check that everything was at it should have been. The overhead power was switched on for the first time and 18 did not need to use its batteries with normal operation used.

Paul Brown, Project Director for Midland Metro Alliance, said: “Seeing the first tram run along the track that our team has worked so hard to install over the past six months was an extremely exciting moment and very rewarding for all of us at the Midland Metro Alliance. We once again thank everyone in the area for their patience during this essential maintenance project.” 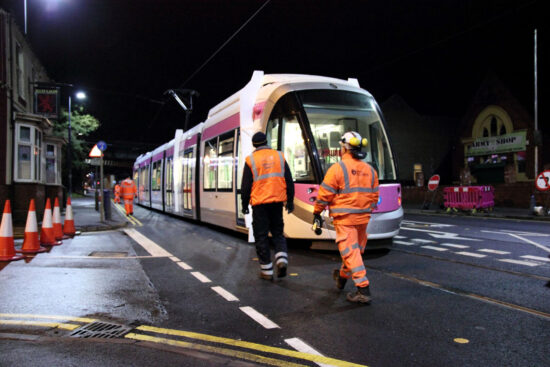 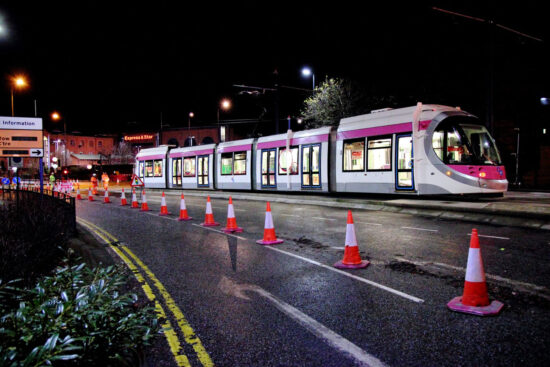 18 heads into Wolverhampton St George’s at the end of the first run of a tram from Priestfield since June 2018. (Both Photographs courtesy of Midland Metro Alliance)