In Pictures: Supertram gets its poppies

Posted on Tuesday 31 October 2017 by Gareth Prior

Poppies are starting to appear on the cab ends of trams on Stagecoach Supertram as part of the Royal British Legion’s annual Poppy Appeal. Each year in the lead up to Remembrance Sunday many UK tramways so adorn their trams with Supertram the first to do so in 2017. The poppies are attached to the cab ends with both the Siemens Duewag and Citylink trams noted with this addition. 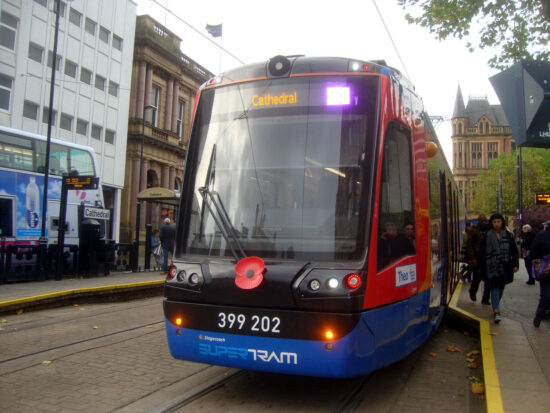 On 28th October 399 202 is seen at Cathedral with its poppy in position. Once again this Citylink tram was seen in service on the Purple route back to Herdings Park, although the destination screen is yet to be changed. (Photograph by Stuart Cooke)