Following on from the recent news that Blackpool Centenary car 645 had been declared surplus to requirements recently by its owners, the tram departed from Windy Harbour Caravan Park at Little Singleton, where it had resided since January 2012, on 27th July. The tram left for a new home – well, actually, its old home – as it has become the latest of the traditional fleet to return to Blackpool having been acquired by the Blackpool Heritage Trust.

645 was actually one of the last of the old fleet to be sold off but departed for a new home soon after, as one of two Centenary cars to be purchased by the owner of a small chain of caravan parks. Whilst 643 was later offered to the Fleetwood Heritage Leisure Trust and has since been sold again, 645 remained in situ at Windy Harbour for considerably longer, although its appearance had deteriorated noticeably during this time, with a few windows being boarded up and the paintwork looking very faded. When the opportunity to bring 645 back home arose, this was readily acted upon and on 28th July the tram made the six mile journey back to Rigby Road, with Scott’s Heavy Haulage responsible for its safe transport using the low loader which had brought Birkenhead 20 to Blackpool on the previous day. It had been hoped to move both trams in a single day, however extracting 645 from its long-term resting place proved to be quite a challenge and darkness had fallen by the time it was loaded up, meaning it did not reach the sanctuary of Rigby Road depot until early the next morning.

Partington’s, who owned the tram, generously agreed to provide it free of charge to the Blackpool Heritage Trust, although following a suggestion a donation was made to a charity of their choosing – this being Brian House Children’s Hospice. This was assisted by Peter Watts of PW Consultancy. Its return enables another phase in the history of the Centenary class to be represented in the heritage collection, the tram having been extensively rebuilt with flatter ends in contrast to sister cars 642 and 648. Although certainly not the most popular trams to grace the tracks, the Centenary cars are undoubtedly an important part of Blackpool’s tramway history and it is therefore most satisfying to see another of the type secured for permanent preservation in its home town. 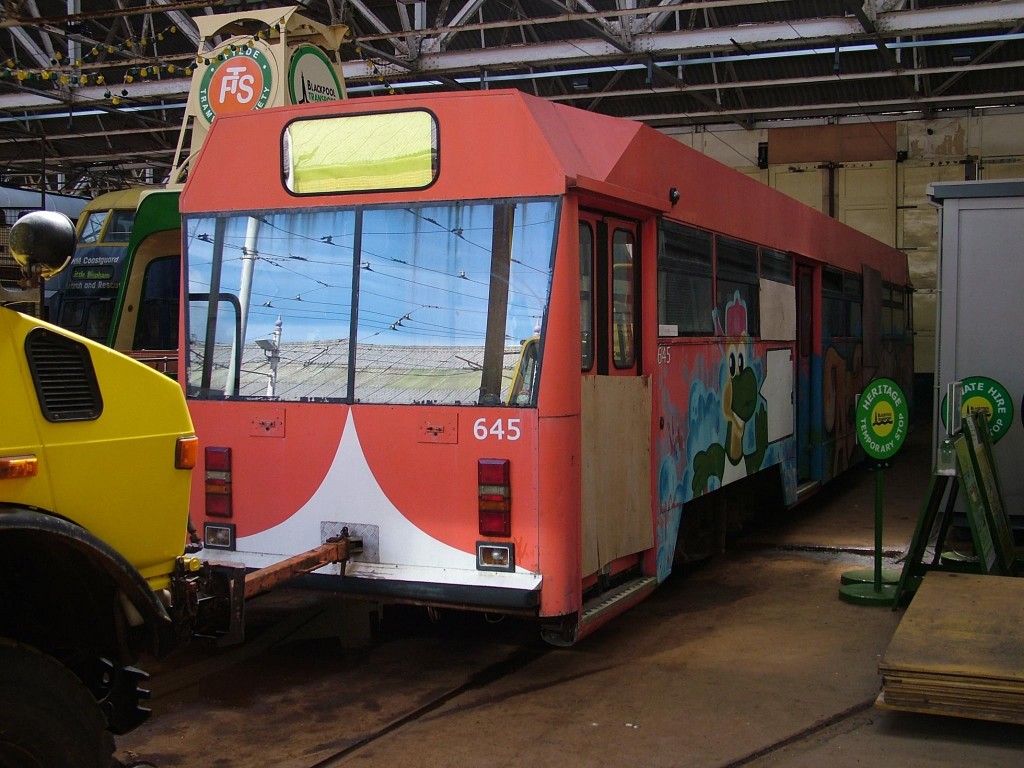 A first look at car 645 back in its old home on 28th July. Notice the wooden boarding over part of the entrance door at the end pictured, and the cartoon/graffiti images painted on its bodyside panels. (Photo courtesy of Blackpool Heritage Tram Tours)