Posted on Saturday 1 July 2017 by Gareth Prior

This edition of Picture in Time is in Sheffield for an image taken on the Stagecoach Supertram system back in 2005.

Another of the Siemens Duewag trams built for the opening of the lines in 1994 is the feature of the photo with this being no. 107. As with all of this class of tram it was built in Dusseldorf, Germany before being transported across to South Yorkshire and the newly constructed depot at Nunnery Square. In this image we see 107 approaching the Halfway terminus on 9th June 2005 with the undulating nature of the Blue line to this location easily seen in the background of the shot. At this time the tram retained its roller destination blinds and was carrying the second Stagecoach livery which as we’ve mentioned in this series before consisted of the white background with blue, red and orange stripes and a dark blue skirt. 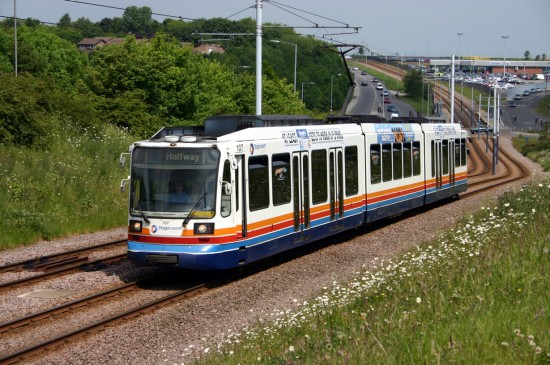