In this instalment of Picture of Time we are featuring the Snaefell Mountain Railway with a view of one of the six vehicles which has carried passengers up to the summit over the years although today it features new bodywork.

No. 5 was built – as were all six cars – by G F Milnes in 1895 in time for the opening of the Snaefell Mountain Railway. Initially unglazed the car soon received glazing to add to passenger comfort – anyone who has been to the summit will be well aware that even on a supposedly warm summers day the wind can pick up with the cars being a welcome sight for a return trip down to Laxey. Sadly no. 5 succumbed to fire in 1970 whilst it was stationary at the summit with an electrical fault blamed for this with the body of the car being almost completely destroyed (with just the frames, one cab end and trucks remaining). The decision was soon made to rebuild no. 5 and complete with a new body it returned to service in 1971 – a remarkably quick rebuild. It is this body which you can see operating up and down the mountain today.

In this photo we see no. 5 at Laxey in August 1963 including the familiar sight of the Laxey station building whilst a couple of Manx Electric Railway vehicles are also seen in the background. 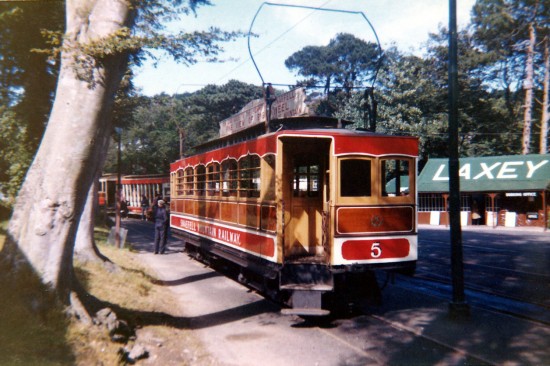