Today Picture in Time is going back to 1958 for a view from Leeds Corporation Tramways with one of the Feltham trams transferred from London featuring.

The tram in this shot is no. 525 which was one of 90 Feltham trams transferred from London Transport in 1950-51 to operate in the West Yorkshire city of Leeds until the system there also closed in 1959. 525 – as numbered in Leeds – was from a batch of trams which were originally built for Metropolitan Electric Tramways in 1930. Although two of this batch do survive in preservation (MET 341/LT 2085/Leeds 526 in the USA and MET 355/LT 2099/Leeds 501 at the London Transport Museum’s Acton store) 525 was not so lucky and was scrapped following the closure of Leeds Corporation Tramways in 1959.

In this view – taken on 8th November 1958 – we see 525 in Corn Exchange with a service bound for The Central Bus Depot. 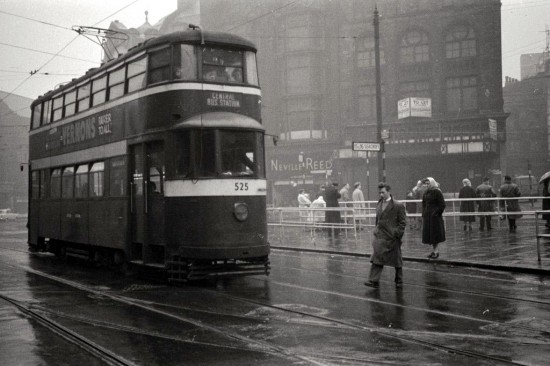