Posted on Saturday 3 June 2017 by Gareth Prior

Both lines have much in common as they are currently just a single line with the majority of journeys (except trips running into depot) running from one end to the other and they were both subject to delays ahead of opening – albeit Edinburgh had much worse delays.

In Edinburgh there has been a degree of acknowledgment of the third anniversary of the tramway – or the tramiversary as they have dubbed it on Twitter – with a short film released highlighting the success of the tram and how it has come to play a crucial role at the heart of the city’s transport network. As well as celebrating the third anniversary of the first public service on 31st May 2014 this film would seem to be a good way of trying to persuade local politicians to back an extension of the line down Leith Walk!

Meanwhile down in the West Midlands the 18th anniversary of the opening of the line between Birmingham and Wolverhampton just happened with no official celebrations. To be fair when you get to this stage of a line’s operating life 18 isn’t a particularly significant milestone and you wouldn’t actually really expect a fanfare.

Midland Metro carried its first passengers on 30th May 1999 with a special free service before fare paying passengers were carried the following day, 31st May 1999. Of course since that time there have been major changes on Midland Metro with the original fleet of T69 trams now replaced by the Urbos 3s whilst extensions to the line have finally started with the Birmingham City Centre extension open and further lines also coming soon. 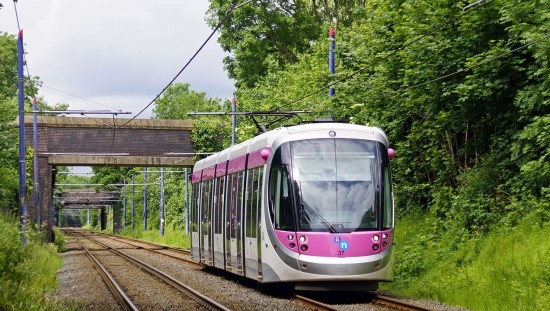 The exact 18th anniversary since the first passenger journeys on Midland Metro – 30th May 2017 – as the newest tram on the line, 37, approaches The Crescent. 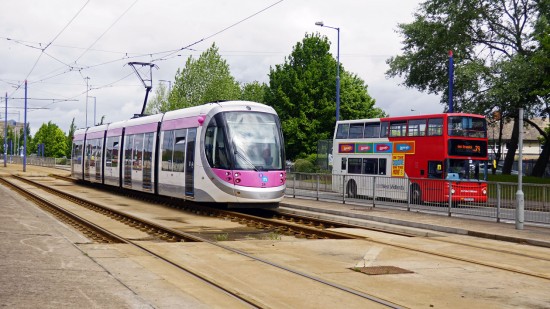 Also on 30th May 2017 we see 24 on the approach to The Royal as a no. 79 bus passes. Views such as this won’t be possible for 6 months soon with the closure of the line north from Priestfield. 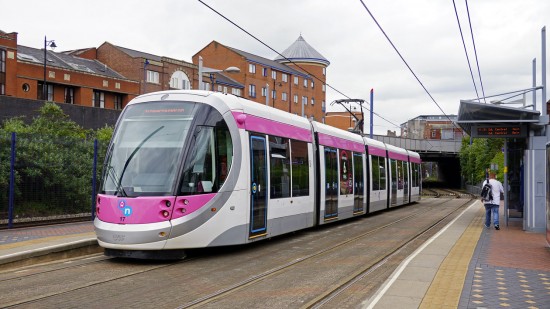 On 31st May the first built of the Urbos 3 trams – 17 – pauses at St Paul’s, which is now the last stop towards Birmingham on the original formation. The tram is on its way to Wolverhampton St George’s. Of note is that the platform destination indicators now list Birmingham bound trams as going to Gd. Central instead of Birmingham. 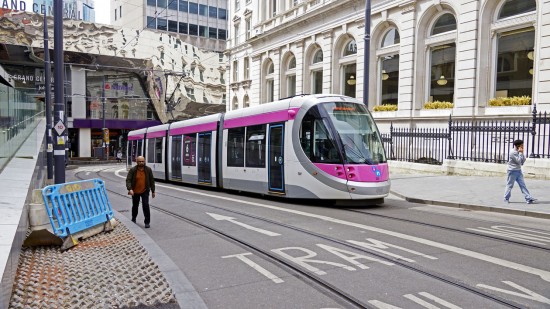 28 accelerates away from Grand Central (with the stop just around the corner) on 31st May with a service for Wolverhampton St George’s. Also apparent is that pedestrians are still determined they need to walk along the track at this location despite there being a perfectly fine path on the other side of the track! (Photographs x4 by Andy Walters) 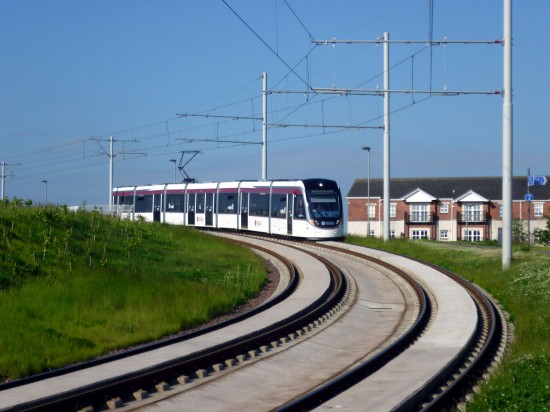 An opening day – 31st May 2014 – image on Edinburgh Trams as 275 forms an inbound working from the Airport as it comes off the Edinburgh & Glasgow Railway viaduct between Saughton and Balgreen. (Photograph by Roy Calderwood)