In Pictures: Once you start, you can’t stop – another new vinyl wrap in Edinburgh

Posted on Wednesday 17 May 2017 by Gareth Prior

If the start of 2017 is remembered for one thing in Edinburgh it looks set to be the advent of the vinyl wrap livery on the tram fleet with 261 having recently received its third different design. This time around it is advertising the Royal Highland Show, which will take place at the Royal Highland Centre, Ingliston between 22nd and 25th June.

261 was the very first of the fleet to receive vinyls back in December 2016 when it received a design for the Hogmanay celebrations in Edinburgh City Centre. These vinyls were then replaced in February by vinyls for the Six Nations Rugby internationals at Murrayfield but in both cases these were very much in house adverts encouraging passengers to take the tram to big events. This new design is the first external advert livery carried on a tram in Edinburgh – although it is still encouraging you to take the tram! – but as with all previous special designs it all only features full height vinyls on the third and fifth sections along with roof level adverts on all other sections.

A special joint ticket has also been launched for entrance to the event and travel on the trams. Customers can purchase discounted tickets on the Royal Highland Show website with show tickets priced at £22 which can be used on any day of the show.

Lea Harrison, Managing Director at Edinburgh Trams, said: “It’s been a great pleasure working with the Royal Highland Show on such a unique launch event. Our new partnership means we can now bring our fast, frequent and reliable service to a whole new audience. Over the weekend we’ll be offering trams from every 7 minutes with journey times of less than 30 minutes between Ingliston Park & Ride and the city centre. With tickets priced at £3.20 return, trams are the obvious choice.”

261 will be travelling on Edinburgh Trams for the next few weeks and passengers are being encouraged to share their photos of the tram on social media using #JoinTheTrampede.

* Meanwhile to help celebrate the third anniversary of the line – on 31st May – staff across the system will be proudly wearing ties and bow ties sporting specially commissioned tram tartan. This special tartan has been designed by local company To Be Wed and Highland Kilt Connections. 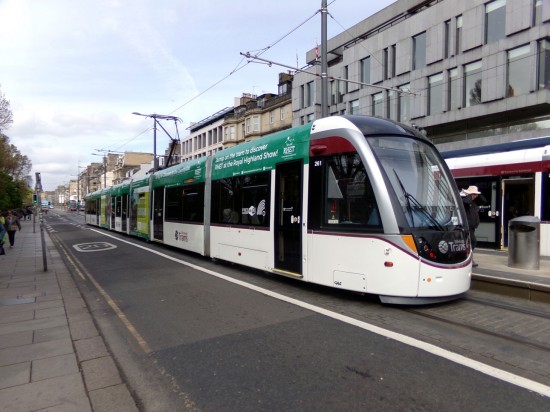 2 Responses to In Pictures: Once you start, you can’t stop – another new vinyl wrap in Edinburgh