For today’s trip into the archives we head to the South Yorkshire city of Sheffield for a view inside one of the original tramway’s depots at Tenter Street with a number of trams present.

Tenter Street Depot was opened by Sheffield Corporation Tramways on 20th September 1929 and was a two storey building with 22 tracks for the housing of trams. A bus garage was found above. The depot remained in use until the closure of the tramway in October 1960 after which it was converted for further use as a bus garage until this too was closed and the building was demolished.

This photo was taken on 8th November 1958 and shows a number of trams at rest within the depot mostly in the mainly white livery although on the right hand side it seems that there is a tram in the dark blue livery. The most easily visible trams are 280 and 272 both of which come from a batch of domed roof cars built between 1936 and 1939 by Sheffield Corporation Tramways. Although neither of these trams survive today Crich’s 264 was part of the same batch. 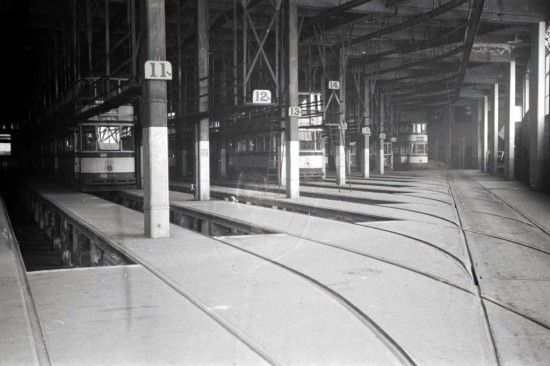