The annual Enthusiasts Tram Event takes place at the Crich Tramway Village on Sunday 29th May – the only event aimed at the tram enthusiast to take place at the home of the National Tramway Museum in 2011. In addition the event seems to have become secondary this year to the “Beside the Seaside” event which is also taking place on Sunday 29th May (and also on the following day – Monday 30th May, it being a Bank Holiday weekend in the UK).

In a move which has to be applauded for the first time Crich have released details of what will be happening on the day in advance including which trams are due to be in service in the morning and afternoon (subject to availability). The highlights of the day look certain to include a celebration of 50 Years since the closure of the Grimsby and Immingham Tramway with a line-up on the Depot Fan – this will include Grimsby & Immingham 14 and Gateshead 5 (which used to operate on the Grimsby & Immingham system after the closure of the Gateshead system). Whilst in the afternoon Blackpool Toastrack 166 will be launched on the Depot Fan following its winter overhauk. Unfortunately the tram is not ready to re-enter passenger service just yet but the chance will, hopefully and subject to availability, be taken for a Workshop Test to be run.

The timetable of events in full (as posted on the Official Crich website):

1030: 50 Years since the closure of Grimsby & Immingham Tramway – Line Up on Depot Fan

1315: Launch of Blackpool 166 on Depot Fan, followed by demonstration of the tram on Workshop Test (subject to availability)

1630: Tramcars start to return to Depot

PM – Glasgow 22, Johannesburg 60, Leeds 399, London Transport 1622 plus a selection from morning trams depending on weather

In addition there is due to be a Book Sale in the Great Exhibition Hall between 1000 and 1500 where a large number of surplus books and journals donated to the Museum will be sold off to raise funds for the reading room to continue to maintain and collections it stores. A large and varied stock will be on sale with prices ranging from £1 to £50. 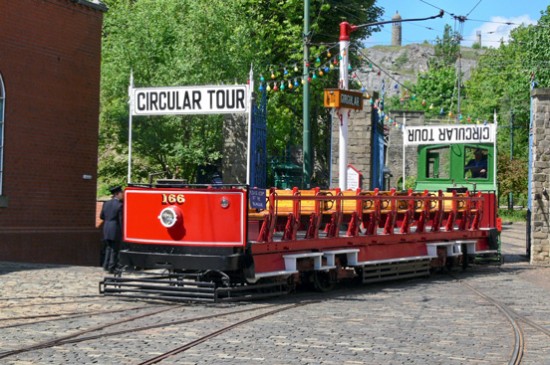 Blackpool Toastrack 166 is seen during last years Enthusiasts Event at Crich being shunted by the Blackpool Electric Locomotive 717 as a withdrawn tram. Just 12 months later the tram will be one of the stars of the Enthusiasts Event in 2011 as it is due to be launched during the afternoon before undertaking a test run. (Photograph by Tony Waddington)

For the record the “Beside the Seaside” event will have the following features:

The site of Crich Tramway Village was part of the mineral railway built by George Stephenson to link the quarry to Ambergate. The Crich site came into the hands of the Tramway Museum Society in 1959 and over the years has developed in an internationally recognised tramway collection with trams from all over the world. A running line of approximately one mile in length is operated when the Museum is open to the public with trams also on display in the Depots and Great Exhibition Hall. The public can also view work on tram restoration projects from the Workshop Viewing Gallery (please note: at the time of writing this is closed due to works associated with the George Stephenson Stone Workshop restoration). Several historic buildings populate the “town end” of the tramway including the facade of the Derby Assembly Rooms and the Stone Workshop – an original George Stephenson building – which is currently undergoing restoration and when finished will be opened as an exhibition space and learning centre. There are also other attractions for the general public including the Woodland Walk and Mining Display at Wakebridge.

Check out our Crich Tramway Village Fleet List for full details of the trams in the Crich fleet – in total there are over 60 on site.

How to find the Museum

Crich is another tram location in the UK where it is a lot easier to get to if you have a car! It is just eight miles from junction 28 of the M1 and can also be accessed using the A38, the A6, the A61 and the A52. A map showing the location of the museum can be found of their website here.

If you do wish to travel by Public Transport it is possible but if using train you better bring your walking boots! The nearest railway station is at Whatstandwell (on the East Midlands Trains Derby-Matlock line) which is approximately one mile away although to get to the Museum it is a very steep uphill walk. Alternatively there are railway stations at Belper, Matlock and Alfreton from where you can either travel by bus (likely to be a limited service on both days of these events) or by Taxi. Local buses run from Matlock, Alfreton, Ripley and Belper and further details can be found from Derbyshire County Council here.

How Much Does it Cost?

These prices are not applicable for Premier Event Days (of which this event is not) and give you free return admission for 12 months.

The official Crich Tramway Village website can be found here.

For the latest news from around the Museum check out their new blog here.

It is not yet know whether there will be any “live” updates of the event as it happens but keep an eye on Yahoo! Groups: Tramgen to see if there are any updates.

After the event British Trams Online will provide comprehensive coverage in the form of an article and photos.

All information in this preview is provided in good faith and is, to the best of our knowledge, correct at the time of going to press (Saturday 21st May 2011).