Posted on Saturday 12 May 2012 by Andrew Waddington

This book is a collection of photographs illustrating the trams and trolleybuses which operated in the town of Chesterfield, including many extremely valuable images which have been gathered together as the result of years of painstaking research. The author does not aim to give a comprehensive history of the town’s transport, but shows the variety of trams and trolleybuses that ran there in a range of different locations. Informative captions provide a good enough background to the system for those with a casual interest, and it reminds me of the excellent Middleton Press series.

The book starts with a brief history of the system, followed by a surprisingly long chapter on the horse trams, which includes several views of Eades reversible tramcars. I was particularly impressed by how many horse tram images the author has managed to source. A brief look at the construction of the electric tramway follows, ahead of a more detailed look at the electric tramcar fleet, including many shots of car 7 which is of course preserved at Crich. I was fascinated by the photographs of the lower deck of car 7 being delivered on a rather simplistic trailer pulled by horses – certainly a world away from today’s transportation methods, and also a timely reminder of the value in capturing scenes like this for the benefit of future generations. There are some very poor images but as these show the more elusive cars in the fleet, their inclusion is quite understandable. 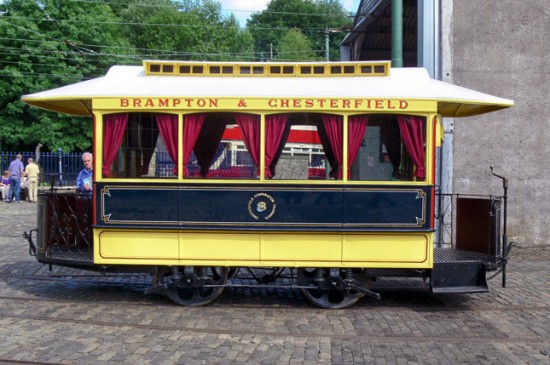 There are two Chesterfield trams in preservation, both at Crich, one representing the horse tram era and the other from the system after it was electrified. This view shows horse tram 8 during Crich's Enthusiasts' Day in 2009. (Photograph by Tony Waddington)

The war years are covered with a separate chapter which largely focuses on the tramway staff and the prominent role of women. This was the part I found least interesting, but will interest some people for the social history element. There are also more unusual pictures showing accidents and decorated trams, before we move on to the replacement trolleybus system. Most readers will probably be glad to hear that this is not covered in as much detail as the trams, but was nonetheless quite interesting and some excellent photos are included. The pictures of pristine vehicles waiting to be scrapped remind us of the value of saving our transport heritage.

At £12.99 this little book is a very cost effective way of collecting some interesting photographs and also acts as a good introduction to the trams of Chesterfield, with some social context also offered. The author has done a grand job of researching his subject and providing captions that are both informative and interesting; I learned a lot and had not realised quite how much had actually happened on the Chesterfield tram system, in spite of its relatively short lifespan. As Chesterfield 7 is one of my favourite preserved trams, I was delighted that this tram features heavily in the book and I would recommend it to anyone who likes to study the working life of trams which still survive today. 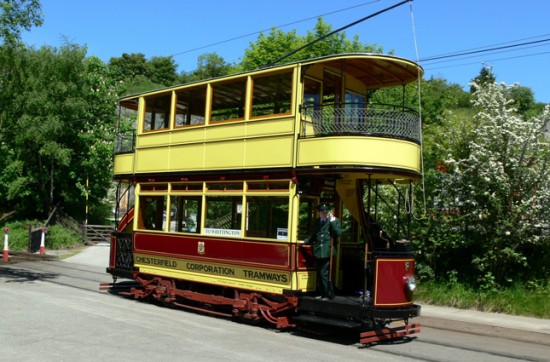 This view shows Chesterfield 7 at Crich in 2009 at the 50th Anniversary of the Tramway Museum Society during the big tram procession. (Photograph by Tony Waddington)

A review copy of this book was supplied to British Trams Online by the publisher.

Please note images shown on this page are not in the book.

This entry was posted in Reviews. Bookmark the permalink.