Whilst plenty of finance and man hours have been devoted to the ongoing preservation of Blackpool’s heritage trams, their home – Rigby Road depot – has been somewhat neglected in the recent past. Happily, this is now being put right with some major repairs to the depot roof currently underway.

The building dates back to the 1930s, like much of its contents, and therefore is just as historic as the trams themselves. Sadly little work has been carried out on the depot for some time, as it was not expected to feature in the future plans for the tramway post-upgrade. All this has changed thanks to the progression of a heritage collection and now the Rigby Road complex has a renewed sense of purpose, thus justifying some much-needed investment. It has been known for some time that the depot roof leaked badly and hopefully the repairs currently being carried out will prevent further leaks, and help to protect the irreplaceable trams housed underneath. Hopefully this will just be the first phase of a series of improvements to the historic tram depot, but for now let us be thankful that a building that seemed to be under immediate threat not so many years ago now appears to have a much more secure future.

With work starting on 28th November, the day after the final ‘Gold’ heritage running weekend of 2016, the power in the depot has been turned off to allow the workmen to access the roof safely. However, the operation of Santa Specials using heritage trams on Saturdays 10th, 17th & 24th December has meant that three cars have had to be extracted each weekend. These have been towed out onto Hopton Road with their pantographs lowered, before being driven under power from this point onwards. It is not known how long this practice will continue although if works run for several weeks then this may occur during the next ‘Winter Gold’ weekends, creating a minor operational challenge but also some potentially interesting photographic opportunities with trams being dragged in and out of the depot! 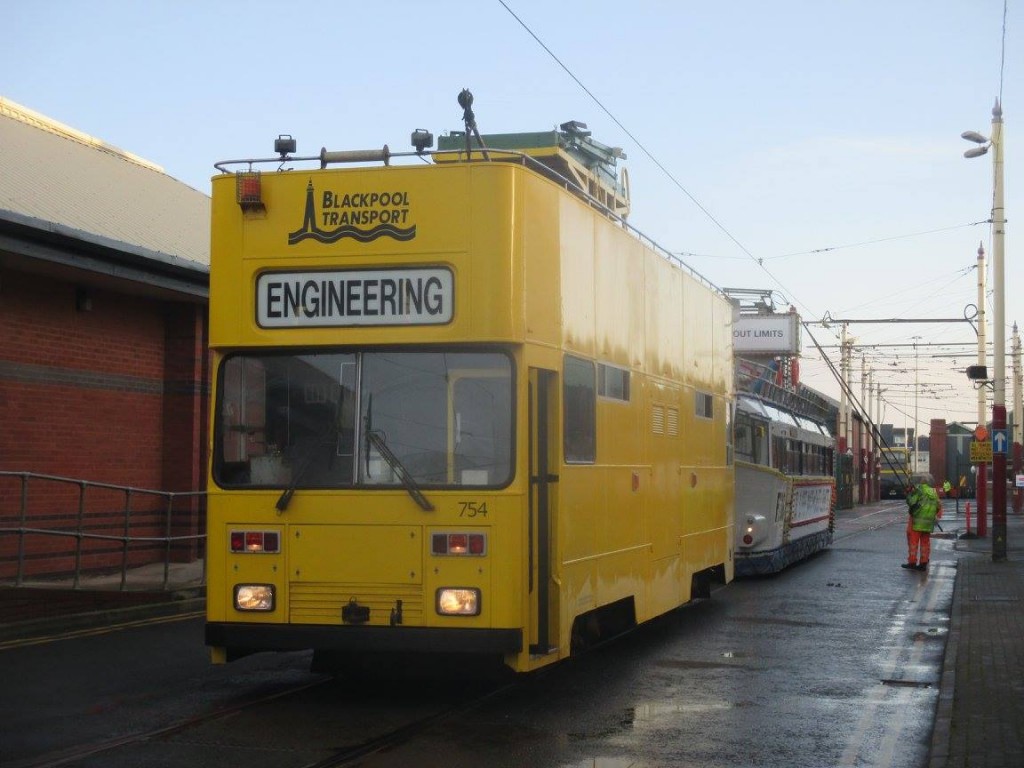 Extracting trams from the depot without the luxury of overhead power has been the norm during December. This process is demonstrated by Engineering car 754 which is shown towing 'HMS Blackpool' 736 onto Hopton Road on 17th December. (Photo by Rob Bray)