Posted on Tuesday 20 December 2016 by Gareth Prior

Picture in Time goes continental today as we take a look at Frankfurt-am-Main 210, a tram which has been in the UK for over 30 years now and in this image we find it at its first home in the West Midlands.

210 was built by Duewag in 1956 for Frankfurt and operated in its home city for the best part of 30 years before it was donated to Birmingham (with the two cities being twinned) and it found a home at the Birmingham and Midland Museum of Transport (now the Wythall Transport Museum). It was always a static exhibit there and as for most of its life in the UK it was on display in the open. The tram then found its way east and a new home at the Great Yeldham Transport Museum in Essex but this was again not to be a permanent home with the museum offering the tram to the Tramway Museum Society in 2012. This offer was not taken up and there was a fear that the tram would end up being scrapped but it was moved the Whitwell and Reepham Preservation Society’s site at Whitwell in Norfolk. Here it is once again in outside storage .

This photo shows 210 at the Birmingham and Midland Museum of Transport on 11th August 1987 surrounded by a selection of preserved buses. 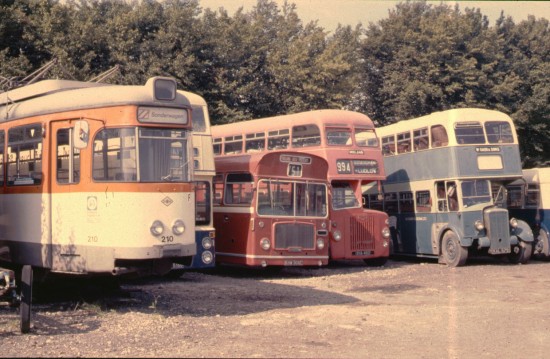 8 Responses to Picture in Time: Frankfurt-am-Main 210