Blackpool’s illuminated Trawler 737 has finally made its long-awaited return to service following a thorough overhaul. The tram made its first appearance on the promenade for nearly two years on Thursday 6th October, when it was unveiled to its main sponsors Lofthouse’s, the makers of the famous Fisherman’s Friend products which of course bear the trawler image which inspired the tram’s design.

Work on the Trawler’s refurbishment has been delayed a few times, and as a result having the tram ready for this deadline proved to be quite a challenge for both the Blackpool Transport workshop staff and the Blackpool Illuminations Department who have worked together on this joint project. However, on October 6th, 737 was towed out of the Fitting Shop to greet a small crowd of invited guests, before operating its maiden voyage to Fleetwood. There, the name ‘Cevic’ painted on its end panels, was unveiled by Tony Lofthouse, having been covered over for its northbound run, before the dignitaries retired to the nearby North Euston hotel for a meal whilst the tram laid over on the Ferry loop before returning south later in the afternoon. Due to bright sunshine it was difficult to appreciate the full effect of its new external illuminations, although this may have been just as well, as a few teething problems were experienced with them! However, a preview was given showing that the many new lights covering the tram can be programmed to display a wide range of different colours, which will no doubt look stunning once these gremlins are ironed out.

Unfortunately, despite efforts to get the lights working properly, the tram had to run unilluminated for its public launch the following evening, with the exception of the blue ‘sea wave’ effect on its skirts. Despite this, the car operated two trips to Fleetwood with ticket holders also receiving a souvenir programme to celebrate its return to service. Hopefully the issues with its new lights will soon be resolved, and 737 can rejoin the Western Train and the Frigate on nightly illumination tours for the remainder of the season after being noticeably absent from service since November 2014. 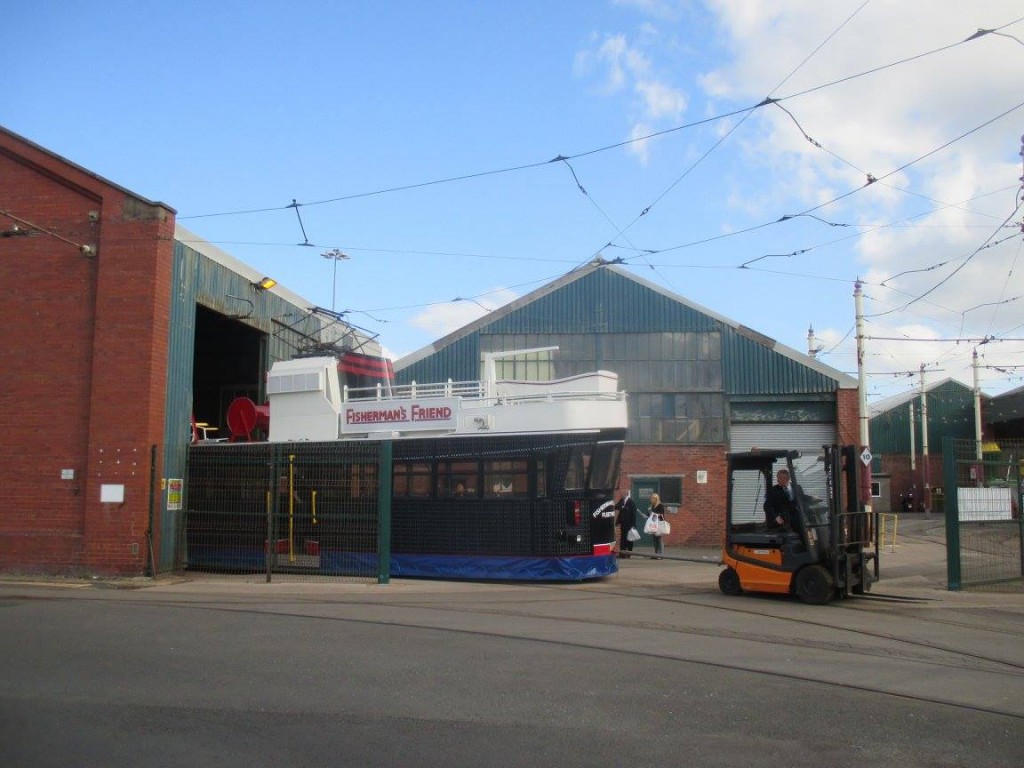 The refurbished Trawler is seen being towed out of the Fitting Shop by a diminutive forklift truck on 6th October. 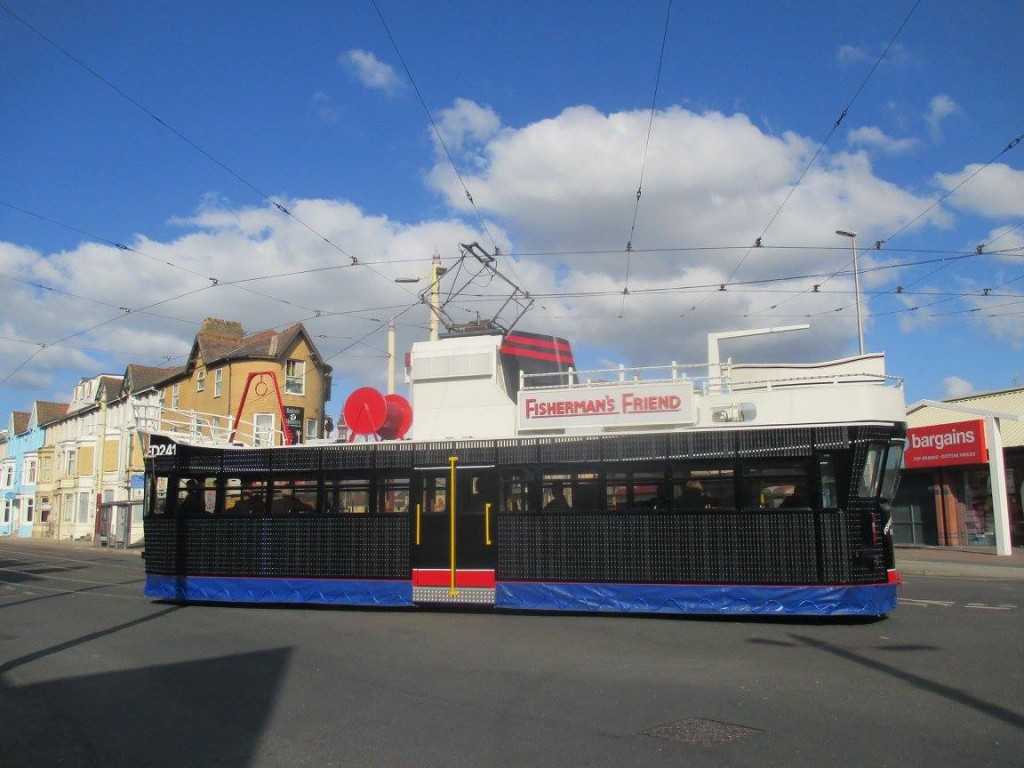 With the invited guests on board, 737 is seen heading for the promenade on its maiden voyage following its refurbishment. (Photos x 2 by Rob Bray) 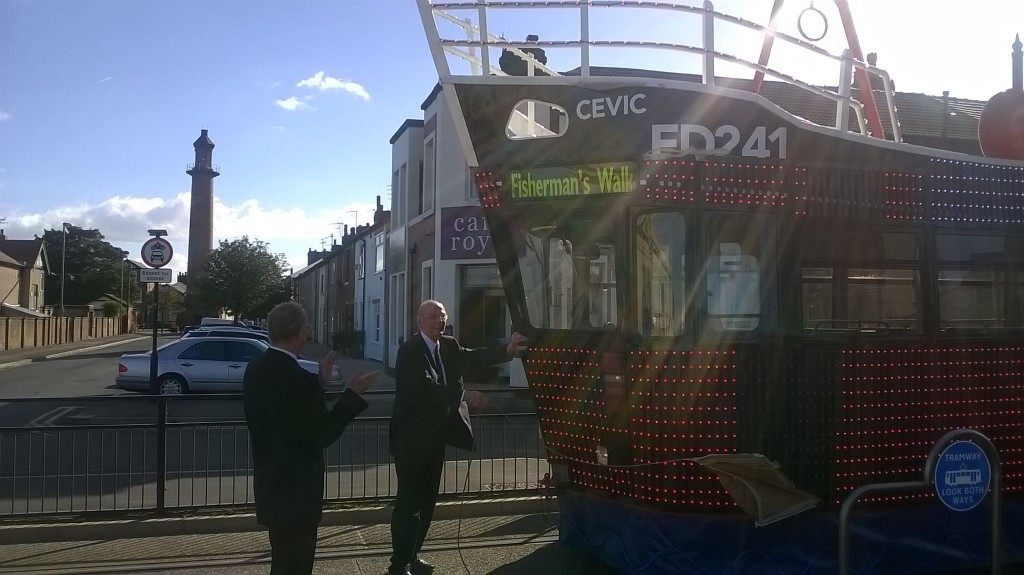 On arrival at Fleetwood, the tram was officially launched by Tony Lofthouse who revealed the name 'Cevic' on the front of the tram - in very bright sunlight! 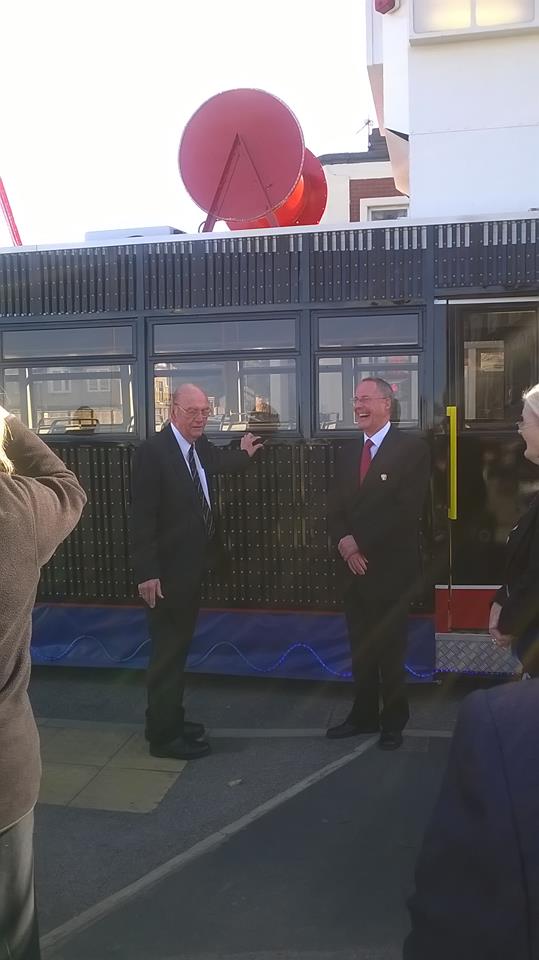 Speeches were made in front of the assembled crowd on Bold Street. (Photos x 2 by Paul Galley)

19 Responses to The Trawler sails again!