Tram returns to Immingham after 51 years away!

The much-hyped loan of Grimsby & Immingham 14 from the National Tramway Museum at Crich, to Immingham took place over the weekend of 21st/22nd July. This historic occasion saw the tram return to Immingham for the first time since the interurban tram system closed way back in 1961, but unfortunately its visit was slightly spoilt by a few issues.

When plans to return 14 to Immingham to mark the centenary of Immingham Dock in the summer of 2012 was first mooted, it was widely assumed that the tram would stay there for most of the summer – and possibly for a good deal longer. However, Immingham Museums, who had requested to borrow the tram, were unable to provide suitable secure accomodation for the tram and so it was decided that it would instead spend a very short period back at Immingham, so that it could be displayed at the docks on Sunday 22nd July. This date was chosen as a large event was being held, exactly 100 years to the day after the dock was formally opened. For many the highlight of the day was a chance to see behind the scenes at the docks for the first time ever, but the visit of a tramcar which once transported workmen to the site would be a source of additional interest.

On Friday 20th July, car 14 was extracted from its normal position on Road 4 in the depot complex at Crich, once the various works vehicles which were blocking it in had been moved out of the way. The tram was then placed on the depot fan to await the arrival of the familiar low loader from Scott’s Heavy Haulage, and was loaded up in the late afternoon. Unfortunately the loading process proved somewhat more tricky than anticipated, with the massive length of the tram no doubt complicating what is normally a straightfoward task for these expert hauliers. With this in mind there was a late change of plan, and it was decided that to avoid having to repeat the difficult loading process, the tram would remain on the lorry for the duration of its stay in Immingham. The tram was duly positioned outside for display on July 22nd, before heading back to Derbyshire after its short adventure. Although partially hidden by barriers, a raised platform enabled visitors to get a closer look at 14 and even have a look inside the car, something which has rarely been offered since it last operated over fifty years ago.

However, that wasn’t quite the end of 14‘s excitement as the tractor unit was required by Scott’s for another urgent job. It was therefore agreed to leave the tram on board the low loader in the car park at Crich Tramway Village throughout Monday 23rd July, with a view to off-loading it early the next morning, before the museum is open to the general public, thus ending its short spell in the limelight.

The TMS should be congratulated for allowing Grimsby & Immingham 14 to revisit its former home to help celebrate such a significant occasion, and for going to such great effort to make this happen in spite of the various obstacles they faced. However, it was very disapointing that the tram’s visit was not better publicised, with some enthusiasts not finding out that it had been home until it was back at Crich! The official website promoting the ‘Immingham 100’ celebrations made no reference to the tram, although a single image of it at Crich was included without any explanation of its identity or where it came from. Bearing this in mind, the cost and effort involved in transporting the tram from Crich to Immingham and back for a one-day event could be considered as being rather wasteful, despite the undoubted significance of its historic trip.

Our grateful thanks go to Malcolm Slater and Stuart Cooke for allowing us to share these photographs with our readers, and we hope that you will find them interesting! 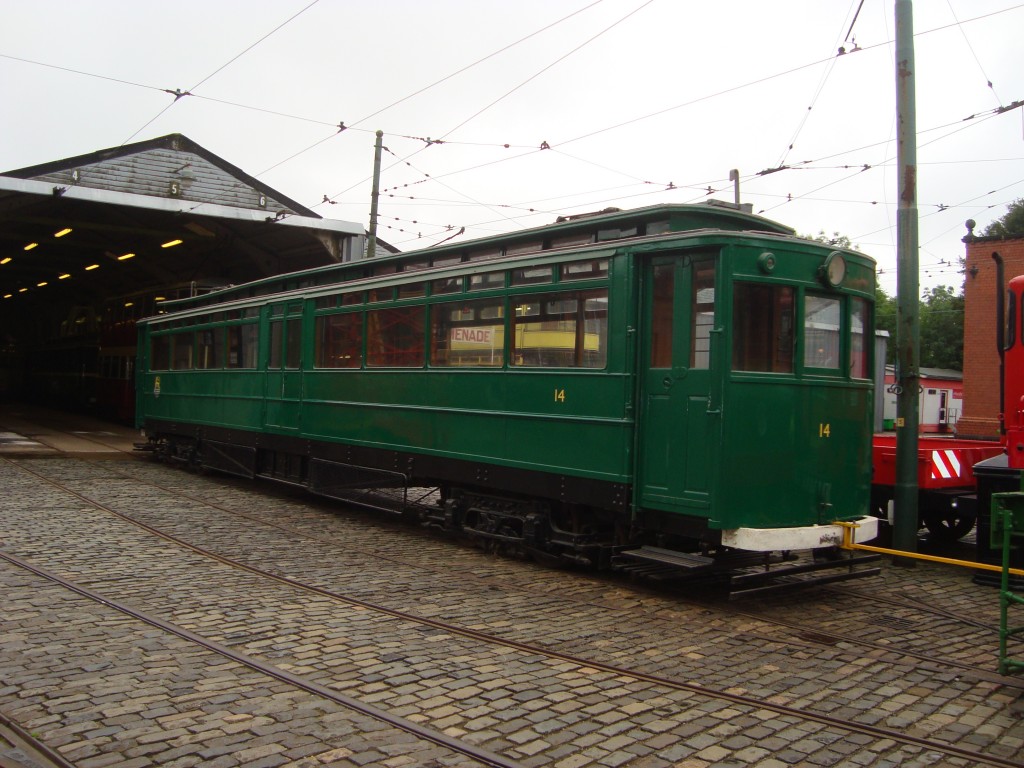 Grimsby & Immingham 14 seen in front of the depots at Crich on July 20th, awaiting the arrival of a lorry to transport it back to familiar territory. (Photo by Stuart Cooke) 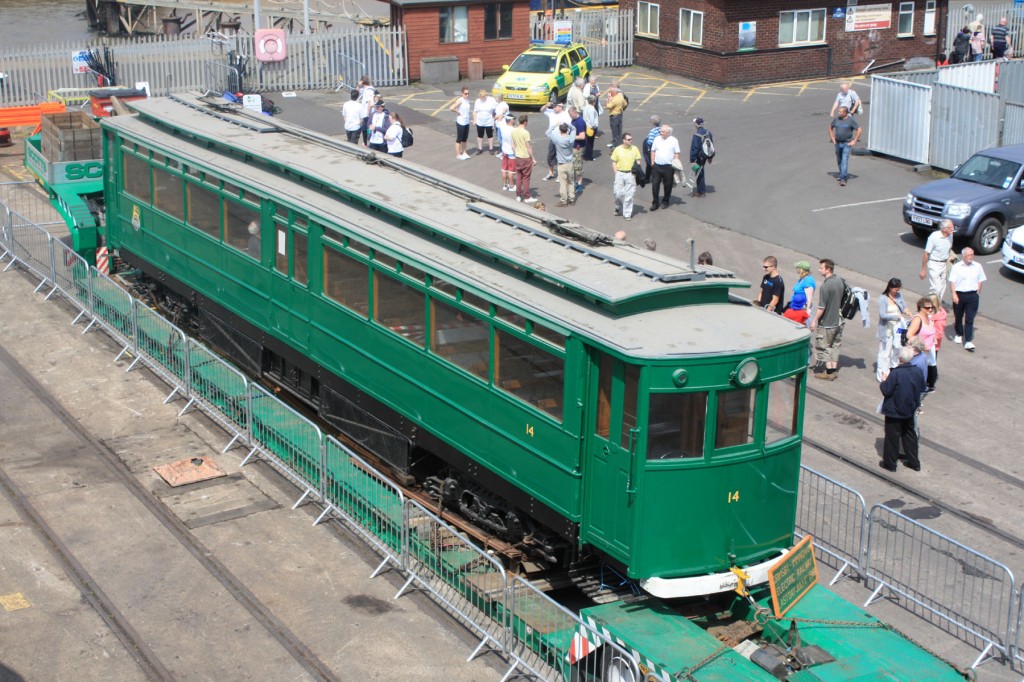 A stunning elevated view of 14 seen on Immingham Docks on July 22nd, with the centenary event underway. (Photo by Malcolm Slater) 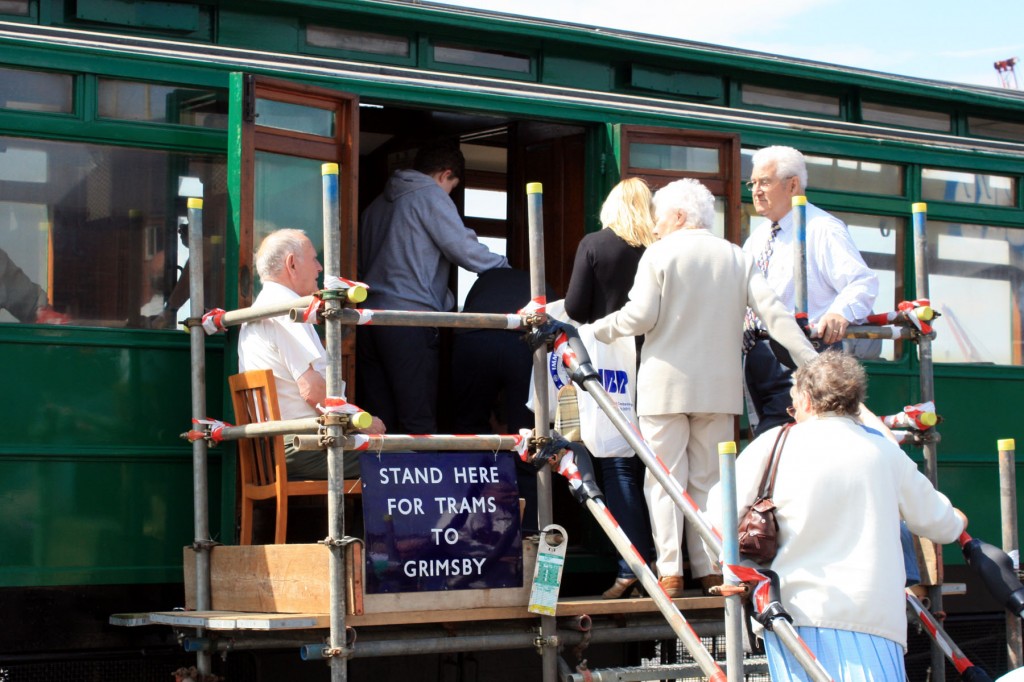