Posted on Sunday 14 February 2016 by Gareth Prior

We are off to the Docklands Light Railway for only the second time in Picture in Time with an image taken of the then fairly new system in 1988.

The Docklands Light Railway had only opened to the public the year before – Her Majesty Queen Elizabeth II had officially opened the line on 30th July 1987 – and at this stage was a much smaller network than that we know today. Only two lines were in operation with services running from Stratford and Tower Gateway to Island Gardens – with all three of these stops having been significantly reconstructed since the opening.

This photograph shows two of the original P86 units running through the heart of the Docklands in the vicinity of Canary Wharf and Heron Quays. There were 11 of these units operating on the network at this time and they had been built in 1986 by Linke-Hoffman-Busch in Germany. These units only lasted in the UK until 1991 when they were sold to Essen and converted for operation on the Stadtbahn where they remain to this day. 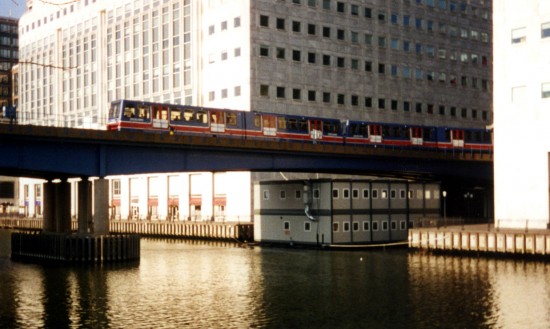 One Response to Picture in Time: Docklands Light Railway