Extensions open in Birmingham and Manchester

Posted on Sunday 6 December 2015 by Gareth Prior

Sunday 6th December was another historic day for UK tramways with both Manchester Metrolink and Midland Metro opening short extensions on the same day – and the best bit of this is that this is just the start of the lines they opened on! Openings in Manchester have been very regular occurrences over the past few years but for Midland Metro this was the first extension since the original line opened.

Starting off in Manchester and whereas other openings in the past few years have seen the dedicated band of enthusiasts recording the historic events having to get up at the crack of dawn the first service to depart from Rochdale Town Centre was at the far more respectable time of slightly after 0800. 3014 was the tram chosen to start this journey and it departed from Rochdale on time becoming the first tram to show Exchange Square on its destination screen. However 3014 was destined not to be the first tram to reach Exchange Square in service as at Monsall it was taken out of service and replaced by 3088 which continued the journey through to the new temporary terminus. It is understood the reason for the change was so that a clean tram could be recorded as the first one at Exchange Square and the only way to guarantee this was to run one directly from depot!

On Sundays services will run to Exchange Square between 0900 and 1700 from Rochdale Town Centre with trams from Ashton-under-Lyne only running as far as Victoria. The rest of the week will see a new service run from Exchange Square to Shaw & Crompton every 12 minutes with the current Rochdale Town Centre to Ashton-under-Lyne service continuing to operate meaning that there will now be trams every 6 minutes between Shaw & Crompton and Manchester City Centre.

This is, of course, the first section of the Second City Crossing to open and this has been made possible by a grant from the European Union. The remainder of the line between Exchange Square and St Peter’s Square is expected to open in 2017 with construction works set to continue on this extension over the next year. These works include the transformation works at St Peter’s Square itself which will see a new four track layout with two new island platforms serving the two city centre crossings.

Meanwhile a far more historic occasion was experienced in the West Midlands with the opening of the Midland Metro extension between St Paul’s and Bull Street. Despite plenty of talk over the years this is the first extension to open on Midland Metro and means that the first time in over 62 years trams are again running on the streets of Birmingham City Centre.

The very first tram to run in public service was unsurprisingly the only named Urbos 3 in the fleet – 35. It arrived at Bull Street at 0750 with not only normal members of the public but also a number of dignitaries from Centro on board. As the tram made its way onto the streets of Birmingham it broke through a special banner before becoming the first tram to terminate at Bull Street. Meanwhile at Wolverhampton St George’s there was also excitement when 27 departed at 0800 with the first full length journey to Bull Street, itself making a little bit of history.

All trams from Wolverhampton St George’s will now be running all the way through to Bull Street (with the destination screens showing Bull Street) for now. Work is continuing on the remainder of the city centre extension with three further stops due to open at Snow Hill, Corporation Street and Grand Central (New Street) at some point during the early part of 2016. It had been originally hoped the full extension would open at the same time but it has been agreed with city businesses that in order to minimise disruption during the busy Christmas trading period there will be a reduction in the amount of work being undertaken. 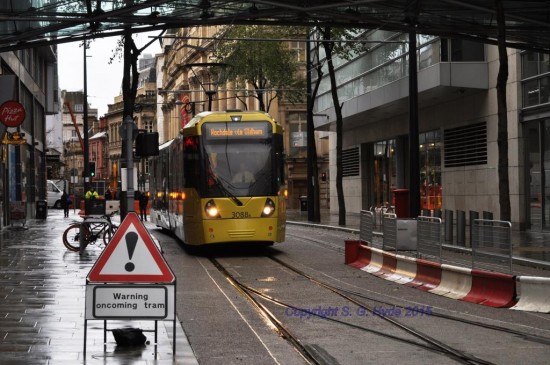 Having arrived with the first service from Rochdale 3088 waits at the temporay terminal point on Corporation Street before drawing forward to the Exchange Square stop. 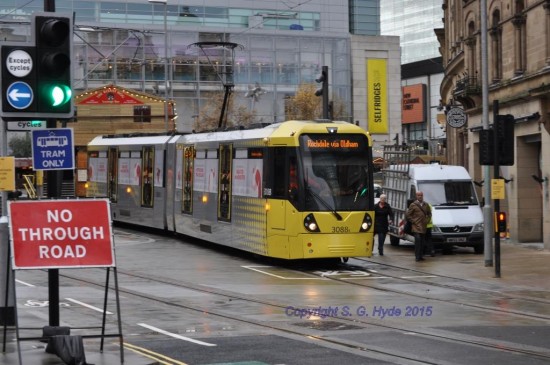 3088 departs from Exchange Square with the first northbound trip on the 2CC to Rochdale. Note the temporary signage informing other road users not to drive their car onto the tracks! (Photographs x2 by Steve Hyde) 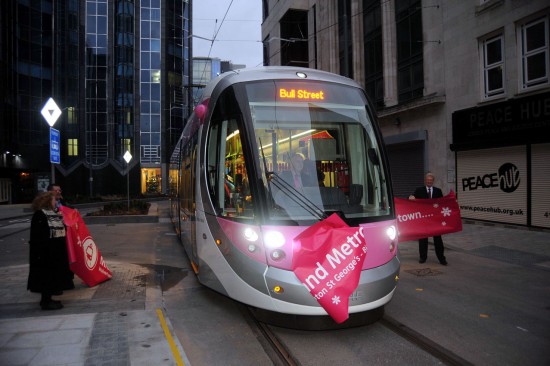 35 becomes the first public service tram on the streets of Birmingham since 1953 as it breaks the banner. 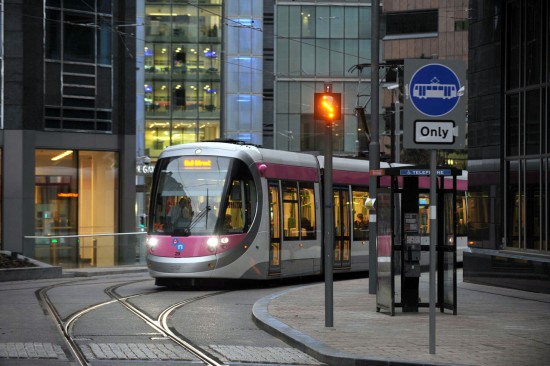 Later on in the morning and 29 is seen on the street section running through to Bull Street. (Photographs x2 courtesy of Centro)

This entry was posted in Manchester Metrolink, West Midlands Metro. Bookmark the permalink.

9 Responses to Extensions open in Birmingham and Manchester