Leeds 399 to light up Halloween at Crich

The Crich workshop team have created a very special extra attraction for this year’s Starlight event at the museum, by decorating Leeds 399 with illuminations. The tram has received a large number of coloured light bulbs and will be one of the stars of the six-day event which runs from Monday 26th October right up to and including Halloween evening itself, Saturday 31st October.

On Saturday 24th October 399 was in the workshop for routine servicing when volunteers added the decorations to give a very useful high capacity enclosed illuminated tram which is sure to prove popular during the event week. The lights surround the upper deck windows and have also been fixed to much of the tram’s beading, on its rocker panels, the dash panels and fenders – not bad for a day’s work! The result is a stunning looking temporary illuminated tram created with fairly minimal outlay, and the efforts made to create it deserve to be applauded. Although the Starlight event is generally geared towards families, hopefully enthusiasts will also find the rare opportunity to see trams running in the dark at Crich appealing and the added novelty of Leeds 399 in its temporary new role as an illuminated car will encourage a few extra visitors to the Tramway Village.

It is expected that 399 will be a first choice for service over the six days the event runs for, along with Blackpool cars Toastrack 166 and Boat 236 (weather permitting of course!), giving a potential pool of three illuminated cars for visitors to enjoy. It is hoped to run at least four trams all week with up to six in service on the Friday and Saturday.

Besides the trams, there will be lots of other activities taking place at what looks like being one of the most ambitious events seen at Crich in recent times, which has justifiably been re-branded as the ‘Starlight Spectacular’. Each of the six days will be boosted by a craft fair in the Exhibition Hall and special lighting effects around the village site, whilst local bird rescue organisation Woodie’s Wings will be bringing some of their owls and parrots along.

On Monday 26th to Wednesday 28th October, young visitors can take a tram ride with a Harry Potter lookalike, whilst from Thursday 29th to Saturday 31st October the village will be invaded by the Cybermen from Dr Who with a David Tennant lookalike also present, along with characters from the hugely successful Disney film Frozen, and merchandise from the movie will be on sale at the gift shop along with character cupcakes at a separate stall. On these three days, children in Halloween or Frozen fancy dress will be admitted free of charge. Finally, local actor Rik Makarem, who plays Nikhil in the TV soap opera Emmerdale, will be a special guest on the Saturday judging a pumpkin competition and he will also be available to meet and greet visitors between 1600 and 1800hrs. There will also be a folk band and a street entertainer present on the Saturday, and some local authors will be signing books on some of the days. The full details of each day can be found on the events page at www.tramway.co.uk.

The last tram of the day will depart from Town End at 1900 from Monday to Wednesday inclusive, and at 2000 on Thursday to Saturday, with the site closing one hour later. Naturally the fact that British summertime is now officially over means that it will be dark much earlier than it previously was, so there will be plenty of chance to enjoy the unusual twilight scenes. Hopefully the efforts being made by the museum will ensure that the 2015 season ends in impressive fashion, and an already popular event will see a bumper turnout thanks to this year’s innovations. 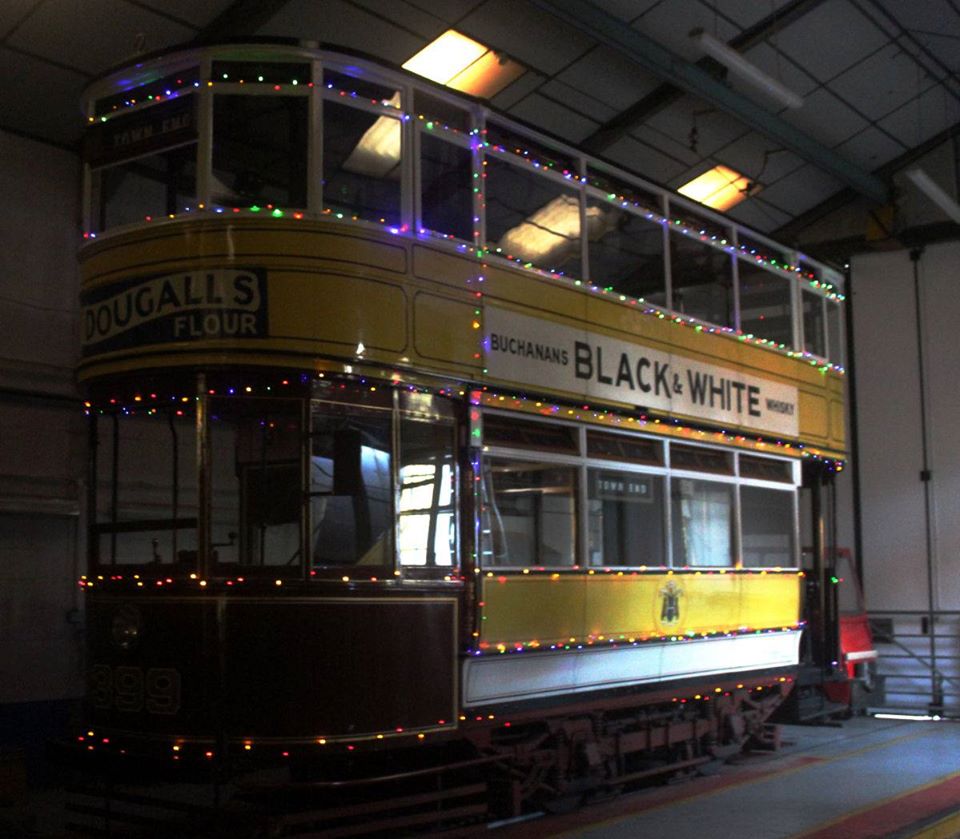 A sneak preview of Leeds 399 with its temporary illuminations seen providing a bit of sparkle inside the Crich workshop on an otherwise dull autumn day, whilst being prepared the Starlight Spectacular event. (Photo by Peter Whiteley)

11 Responses to Leeds 399 to light up Halloween at Crich