Posted on Tuesday 1 September 2015 by Gareth Prior

Today “Picture in Time” is off to the south coast and a visit to Eastbourne in 1965 and a view of a tram we now know as Seaton 7 but this was five years before the Modern Electric Tramways operation was moved along the south coast to Devon.

Originally built in 1958 7 was constructed to the 2 foot gauge that the tramway ran on in Eastbourne. It was – and still is – an open top double deck tram with a crossbench style on the lower deck albeit with two small saloons at each end to provide a little bit of shelter from the elements. Following the move to Seaton the tram was eventually regauged to 2 foot 9 inches but this did not take place until 1976, some six years after the move. 7 was a regular performer on the tramway until 2007 when it was withdrawn with the intention of it undergoing a full overhaul and returning to service. Unfortunately for whatever reason this work has never been completed and 7 remains stored in the tramway’s Riverside Depot and is destined to remain out of service for some time to come.

This photo shows 7 at Eastbourne in 1965 with passengers waiting to board for a ride. 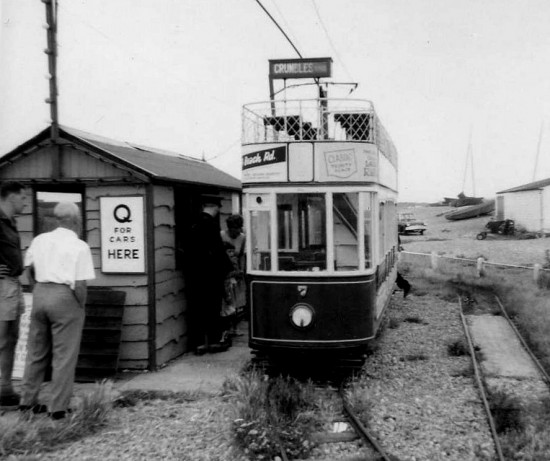 1 Response to Picture in Time: Seaton 7