Beamish goes Downton for the day

On Monday 13th July, a high-profile filming assignment for the final series of the TV drama series Downton Abbey took place at Beamish Museum. The period setting of the museum’s town area was the perfect venue for some scenes for the costume drama to be filmed, and Newcastle 114 played a starring role in the proceedings, albeit in disguise.

The main filming session during the early part of the day took place at the garage and car showroom located within the main town, although this was complicated somewhat as the producers had requested that the scenes be based in winter! This meant applying a coating of snow to the street outside, with various extras dressed in winter atire. Unusually, the filming took place on a day when the museum was open to the public and this created some rather unusual scenes which visitors no doubt found interesting!

Further filming took place in the evening and for this, Newcastle 114 was used. The car was intended to portray a York tram although its livery is not really appropriate for this, however the coat of arms on the rocker panels was covered up by York crests for the filming session. The tram also received different advert boards on the upper deck decency panels, but retained the bunting on its trolley pole which was first fitted to mark 40 years of the museum’s tramway in 2013.

All of these temporary changes were reversed and the following day there was no evidence on site to suggest that anything out of the ordinary had happened, although the museum has gained additional income and will hopefully benefit from some mainstream TV exposure later this year. As if that wasn’t enough publicity, just two days later actor and television personality was present, filming for a new documentary programme also to be broadcast on ITV – although this was focussing on the Pockerley Waggonway rather than the town and trams. 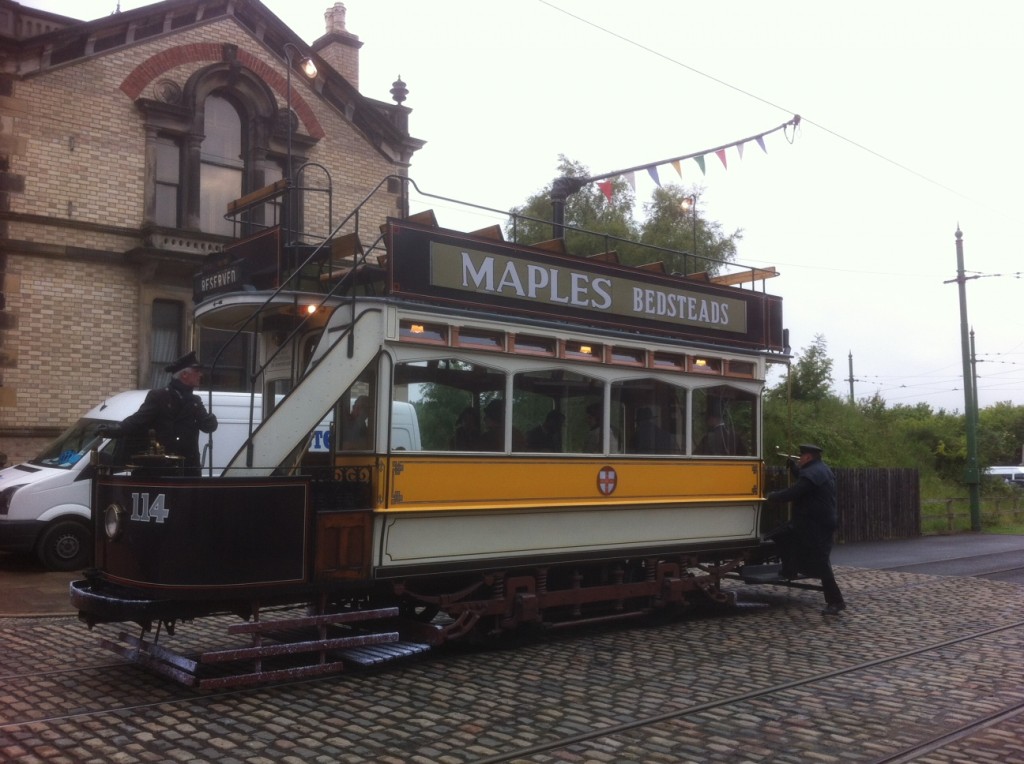 Newcastle (or is it York?) 114 poses outside the Barclay's Bank during evening filming for Downton Abbey on July 13th. (Photo courtesy of the Beamish Transport & Industry Blog)