Its not only the main public transport tramways who have to disrupt services due to engineering works as was shown at the Crich Tramway Village on Wednesday 24th June. Necessary maintenance work was required on the points at the north end of Wakebridge which meant that all trams were terminated at Wakebridge between the opening of the Museum until around 1400.

It had been hoped that the works to repair the points would be completed before the service started at 1030 but warnings were released on social media the previous day informing potential visitors that there may be an overrun and in the end that is what happened.

The Blackpool Electric Locomotive and a permanent way team had left the depot soon after 0900 but it was soon discovered that replacement parts had to be manufactured and this was done within Crich’s own workshops. The repairs to the points were completed during the early afternoon and a full service to Glory Mine resumed from 1400. 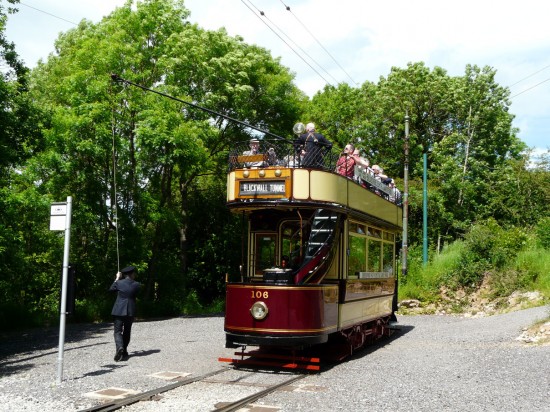 The first tram to run in service back through to Glory Mine was London County Council 106. (Photograph courtesy of Crich Tramway Village)