On Sunday 21st June, a specially amended gold timetabled operated with the Blackpool heritage tram fleet. This day should have witnessed the Totally Transport event which had been held annually on New South Promenade since 2005, but which was sadly cancelled this year. However, undeterred by this setback Blackpool Transport decided to operate its heritage trams to Starr Gate anyway, and it would be fair to state that this was a great success.

Six trams were selected for service on this day, based on the rather pessimistic weather forecast – Standard 147, Twin set 272+T2, Brush Railcoach 631, Centenary car 648 and Balloons 715 and 717. In spite of the cold wind, the day was sunny and dry which made the event all the more enjoyable. A frequent timetabled service was operated by the six historic trams with departures from Starr Gate – where a special temporary heritage tram stop had been placed for one day only – every twenty minutes. A second temporary stop sign was placed alongside the main line at Pleasure Beach, so that trams could load and unload at this busy location even when they did not use the turning circles. Most of the northbound journeys ran to either Bispham or Little Bispham although there were also a few shorter runs, but on several occasions throughout the day trams continued right through to Fleetwood, giving the rare opportunity of a ride along the entire length of the system aboard the heritage cars. All six trams ran to Fleetwood at least once during the course of the day, with 147 and 715 going there twice each. Another unusual journey was performed by 715 which terminated at Thornton Gate on its last northbound run of the day. Another highlight was the use of 648 which unusually ran all the way to Fleetwood Ferry in the afternoon; the positioning of a bollard close to the tracks near to the terminus normally leads to the Centenary cars turning short at Ash Street, but on this occasion 648 was allowed to continue north and with one of the company’s best drivers in control, this tram put in a superb performance.

Further novelty value was provided when cars 648 and 715 were both stabled on the loop at Starr Gate at lunchtime whilst their crews took their breaks, probably the first time that heritage trams have ever done this. There were plenty of excellent photo opportunities, one of particular note coming late in the day when Standard 147 and Balloon 715 both ended up together at Starr Gate along with two Flexities creating a real tram jam! It was also nice to see some of the more underrated workhorses from the fleet taking centre stage on this occasion, and indeed most of the trams in use had not actually run to Starr Gate in public service since the southern section of the line was closed in 2009 prior to the upgrade works beginning. To ride on a Twin set and a Centenary car along this section was certainly a rare treat and its amazing that such simple pleasures which were once commonplace are now seriously rare, and make for a very special event. With these trams also picking up and dropping off passengers at Starr Gate, which did not occur last year, there was a real feel of the old days on the tramway and the hard working crews helped to add to a wonderful atmosphere, as did Heritage Trust Chairman Bryan Lindop who, as usual, was overseeing the proceedings from the Pleasure Beach.

The number of enthusiasts in attendance for this historic day was slightly disappointing bearing in mind what was on offer, but this was seemingly made up for by the encouraging number of members of the public who were riding on the traditional trams, either using them as a form of transport or just for the sake of it! The extension of heritage tours to Starr Gate at last year’s Totally Transport event was something of an experiment, and this year’s performance went even more smoothly. An excellent timetable, no doubt helped by the use of mainly pantograph fitted cars (trolley cars have to guided through some of the complex trackwork near the new tram depot due to their tendency to dewire), ensured that the whole operation went very smoothly and the process of reversing the cars at Starr Gate was done efficiently and without holding up the core service. Hopefully repeat performances will occur occasionally in the years ahead, ensuring that a new generation of enthusiasts can enjoy the novelty of heritage trams running from Starr Gate to Fleetwood, just as they did before 2009! 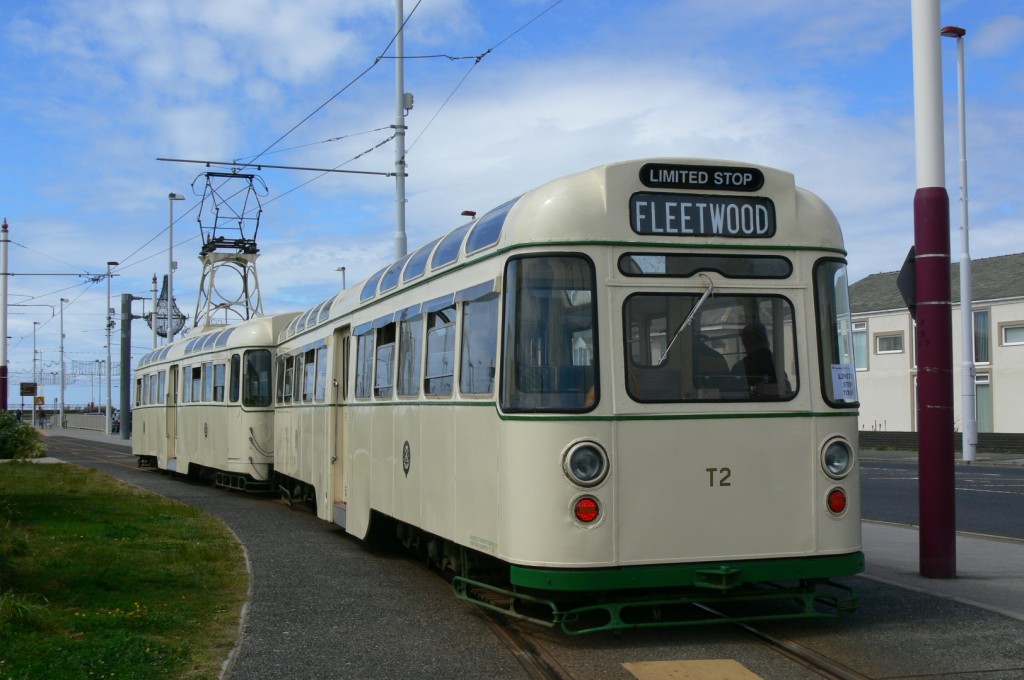 Recently repaired after suffering an electrical fault earlier in the year, T2+272 are seen reversing at Starr Gate before heading for Fleetwood on a rare full length journey. 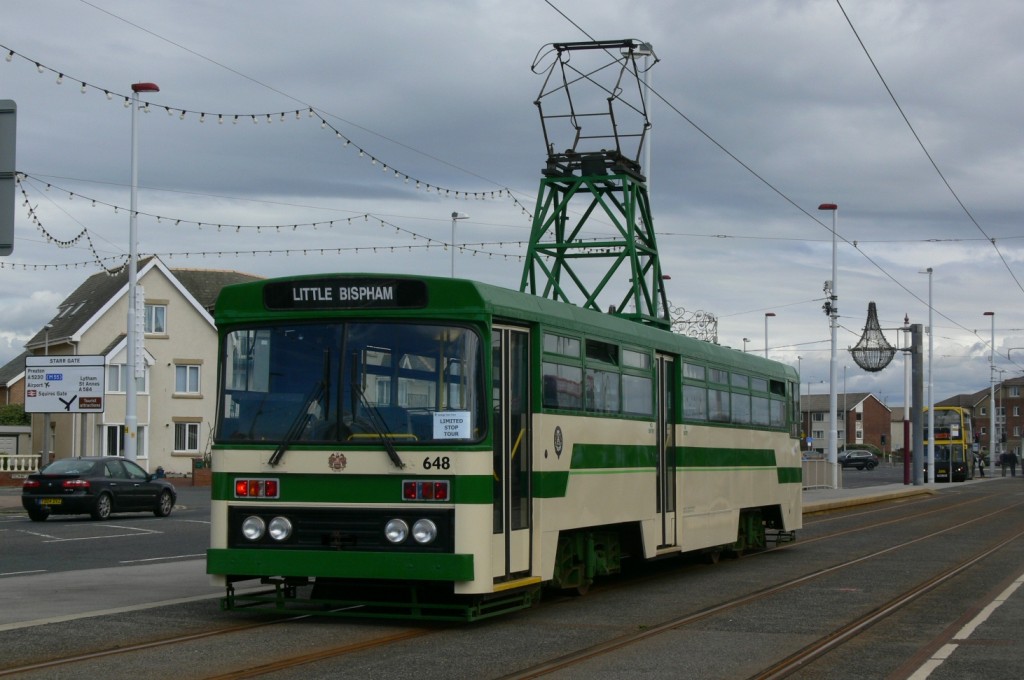 Once a daily sight, a Centenary car at Starr Gate post-upgrade has been a considerable rarity for 648 went there several times on June 21st, as pictured here. 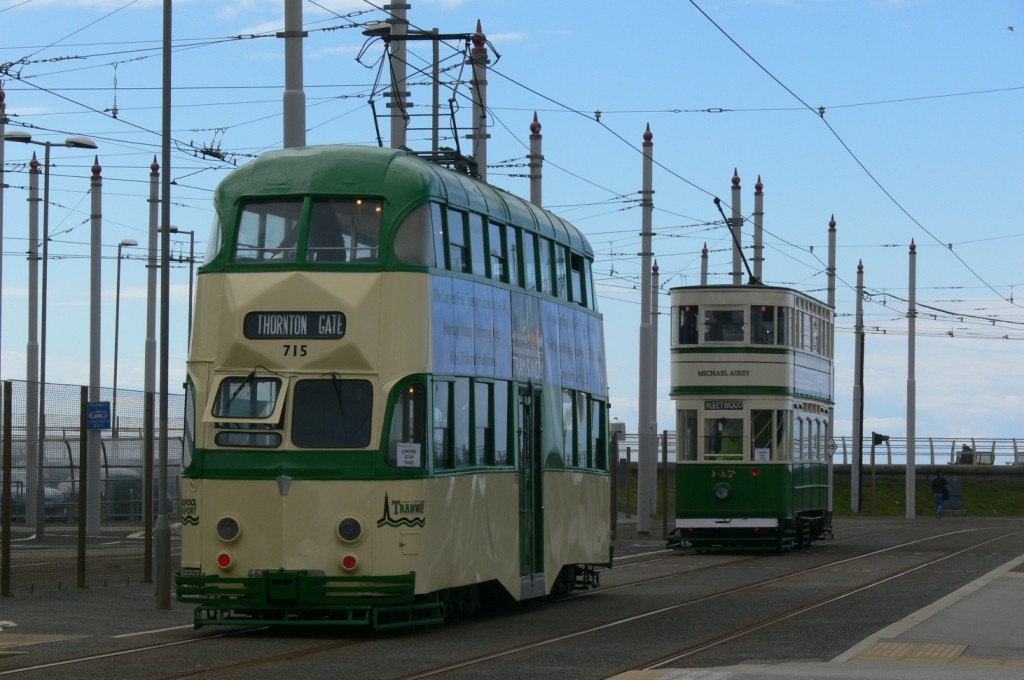 Standard 147 and Balloon 715 are seen at the temporary boarding stop at Starr Gate; the former bound for Fleetwood, and the latter destined, unusually, for Thornton Gate. (Photos x 3 by Andrew Waddington)

6 Responses to Starr Gate to Fleetwood by heritage tram