The latest instalment of “Picture in Time” is once again back in Manchester as we take a look at Metrolink T68 1006 in a view at Queens Road Depot.

Like its sisters 1006 was built by Firema at their Casaralta Works and was delivered to Manchester on 29th December 1991 – a late Christmas present if you like! Entering service on day one of public operations, 6th April 1992, the tram suffered severe damage in August 1996 when involved in a RTC whilst crossing Corporation Street which necessitated the B car having to be sent to Washwood Heath for repairs. Ten years later 1006 was on its travels again when it went to Wolverton Works as part of the refurbishment programme returning to service in June 2006. For the next six years it mainly just went about its daily business with little fuss until the decision was made to withdraw it from service, this happening on 30th August 2012 when it became the seventh to be withdrawn. It lingered on in Manchester until 13th June 2014 at which point it was loaded onto the back of a lorry for an one way trip to Rotherham and the scrapman.

The date is 12th January 1992 for today’s photo as 1006 rests at Queens Road Depot during the testing and commissioning process of Manchester Metrolink. 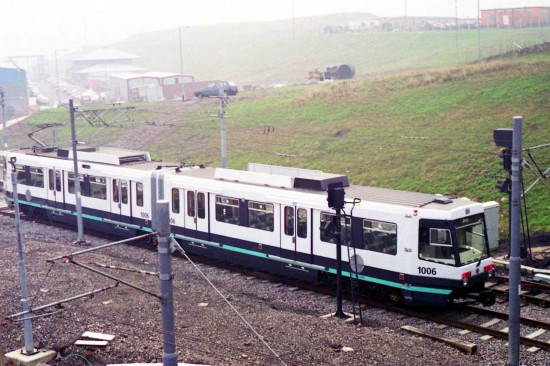