Blackpool 680 on the move again

Despite having only arrived in Manchester at the end of March following a period of operation at Beamish Museum, Blackpool Ex-Towing car 680 will soon be leaving the Heaton Park Tramway for another loan period. This time, the car is set to return ‘home’ to Blackpool, where it will be joining the heritage fleet as a temporary new addition to coincide with celebrations marking the 130th anniversary of the famous coastal system, and to help fill a gap in the resident heritage collection.

It is planned that 680 will remain in service at the park for most of the summer in its current guise as 280 and retaining the bland cream livery it has worn since October 2010, and it will be one of the main attractions at a Blackpool-themed event to be held on 8th & 9th August, after which it will be withdrawn in preparation for its next adventure. Shortly afterwards, 680 will be treated to a full repaint in the 1990s style green and cream livery, complete with black window surrounds and Blackpool Transport logos, which will suit its current condition much better than the plain cream livery worn at present, and it will also regain its more familiar latter day fleet number becoming 680 once again. It is planned that the tram will be ready to move to Blackpool in time to participate in the weekend of events being held on 26th & 27th September to celebrate the tramway’s 130th anniversary, and it will regain a pantograph before it re-enters service in Blackpool to complete its authentic appearance. It will therefore become the second preserved Blackpool tram to return for a visit in the light rail era, following on from the memorable visit of Pantograph car 167 from Crich in 2014.

MTMS Chairman Bob Hill said ‘We are delighted to be working with Blackpool Transport once again and that Heaton Park Tramway can support the ground breaking Heritage venture. I am thrilled that one of our Trams will delight visitors as part of Blackpool’s famous Heritage Tram Tours. 680 will fill a current gap in the Heritage Collection as it is the only operational Ex-Towing Railcoach and will be the only single deck Tram in 1990s condition in Blackpool.’

680‘s loan should further strengthen the excellent working relationship between Blackpool Transport and the Manchester Transport Museum Society, whilst enthusiasts will no doubt enjoy the chance to ride on an Ex-Towing car to Fleetwood again for the first time since 2008 – something that few of us had ever expected to be able to experience again. However, some people have already expressed slight disappointment that the tramway’s latest addition will depart so soon after being launched into service, although for most seeing 680 back in Blackpool should more than make up for this!

The chance to ride on 680 at Blackpool again is likely to be one of the unexpected highlights of the year for tram enthusiasts. The tram had last operated in Blackpool in 2008, and its return will enable it to become the first single English Electric Railcoach to run on the modernised system, albeit in a heavily modernised form. 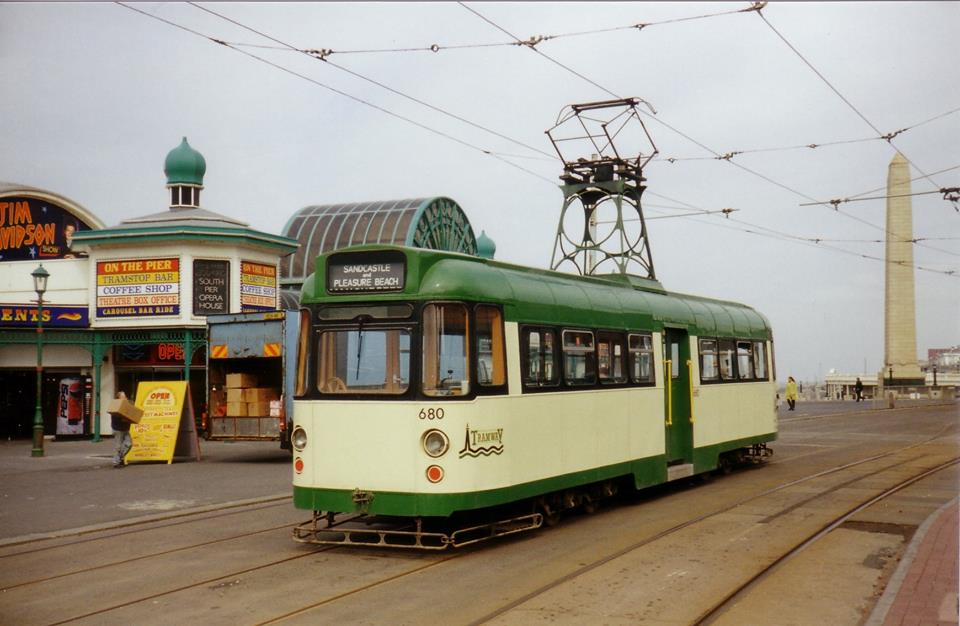 A classic Blackpool scene with 680 in its 1990s livery at North Pier, a sight which should be recreated in just a few months from now when it returns on loan from the MTMS. (Photo courtesy of Blackpool Heritage Tram Tours)

10 Responses to Blackpool 680 on the move again