A tantilising glimpse of the next exciting project set to be unveiled by the Blackpool Heritage Trust and Blackpool Transport’s workshops has been given, in the shape of a preview of the work undertaken so far on Twin set 675+685. So far only the trailer has been in the works but work on repainting 685 into an appropriate livery style is already at quite an advanced level.

It has been confirmed that 675+685 will be outshopped in the 1970s fleet livery, with the top half of both cars painted green and the bottom half painted cream. Although not the most imaginative livery worn by the Twin cars, it was the most enduring as it actually first appeared in the mid-1960s, with this particular set adopting it when they were still numbered 275+T5 and then retaining it until 1990. Despite there being a few minor variations over the years, this basic style endured until it finally disappeared in 1992 with the ‘green skirt’ livery taking over, until it too was replaced by the colourful Metro Coastlines liveries applied to several of the class. Now, after an absence of over twenty years, it will soon be seen again and many fans of the heritage fleet cannot wait!

685 has received extensive preparation for its fresh coat of paint, including the removal of the Metro branding it has worn since 2004. Once its repaint has been completed attention will presumably turn towards 675 which remains stored in the depot for now awaiting its turn in the Paint Shop. The new period style destination blinds which are being progressively fitted to the heritage fleet will then complete the smart appearance. The aim is to have the Twin car ready for service for the autumn, although if works keeps progressing at this rate it would not be a complete surprise if it was available even sooner. However, by the end of the year there should be two operational Twin cars in Blackpool, carrying contrasting liveries from their illustrious past, which should certainly be well worth waiting for. 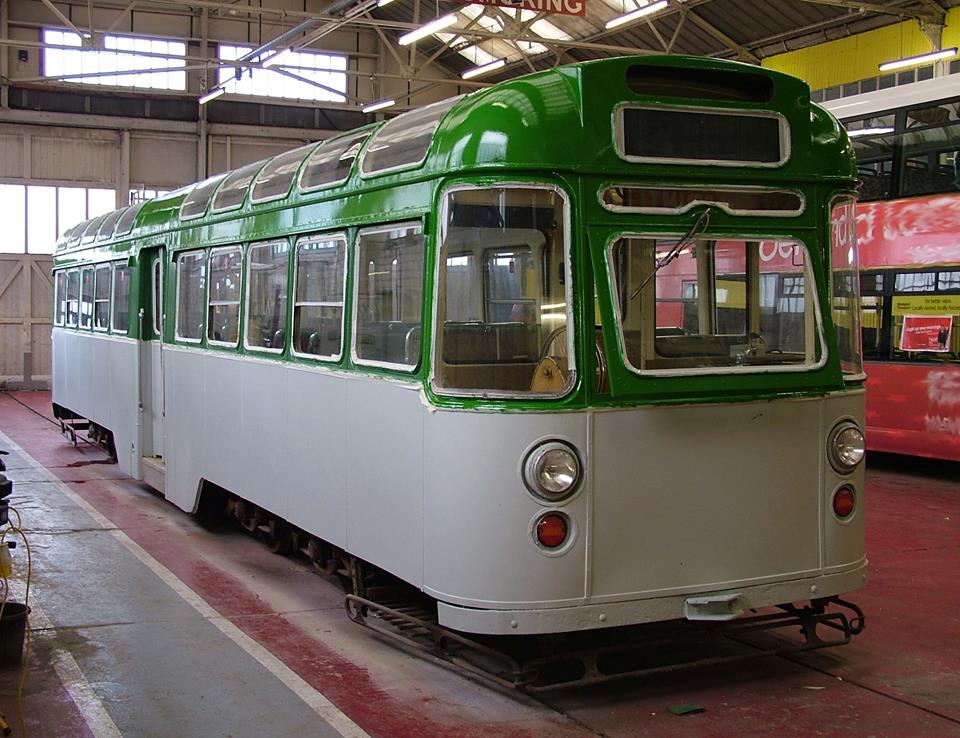 A look at 685 inside the Paint Shop clearly revealing its new livery. The top half is already painted green with the lower body shown in undercoat. (Photo courtesy of Blackpool Heritage Tram Tours)