Today “Picture in Time” is going black and white with a view in central Blackpool of the onetime saviours of the Blackpool Tramway – OMO Car 1.

OMO Car 1 was built as English Electric second series Railcoach 269 and entered service in this form in June 1935. It ran as a Railcoach for 35 years until withdrawal in August 1970 and a transfer to Blackpool Corporation Transport’s own workshops for conversion into the first of the OMO cars. Although it was the first numbered of the OMO Cars it actually entered service after no. 2 with the first passengers being carried on board the tram in the middle of October 1972. 1 received a pantograph in 1984 at a time when it still had another five years of passenger service in it but in June 1989 it was the end and the tram was withdrawn for a second time. This time there was to be no rebuild and having hung round Rigby Road Depot for several years it was cutup in November 1993.

This view shows 1 at Tower in 1974 when running through to Starr Gate. 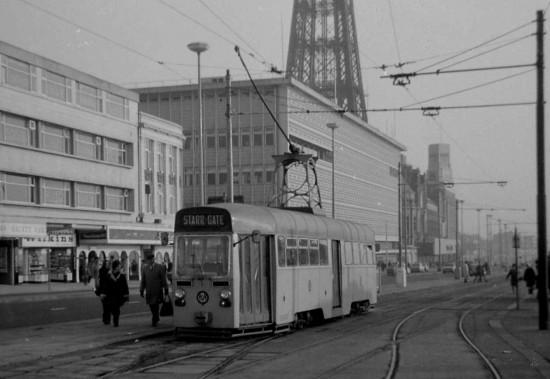