It has been announced by the Fleetwood Heritage Leisure Trust that they are currently in negotiations with Blackpool Transport which could see the Trust’s Jubilee car 761 remain at Rigby Road Depot for the foreseeable future and return to service as part of the heritage fleet from 2016.

The tram has recently had an examination and the work required to return the tram to service has been costed. It is hoped that the work will be sponsored and recent discussions have been concentrating on how this could be achieved. It is hoped that there will be sufficient workshop space for the work to be undertaken over the forthcoming winter period and that it may be possible to return the tram to service at some point in 2016. As part of the work the faded and bright all over advert for Wynsors World of Shoes would be removed although it is not know what livery would replace this.

761 last ran on the Blackpool Tramway on the last day of the traditional tramway – Sunday 6th November 2011 – and was subsequently acquired for preservation by the Fleetwood Heritage Leisure Trust. Departing Rigby Road in November 2011 761 was initially stored in the yard of Halsall Toys International before moving back to Rigby Road in December 2013 for secure storage. With the Fleetwood Heritage Leisure Trust aware of the historical significance of the tramcar they have now been in discussions with management at Blackpool Transport to possibly see the large capacity tram running on its home tramway once again.

Both Blackpool Transport and the Fleetwood Heritage Leisure Trust are keen to work together to bring the tram back to service but it should be stressed nothing is yet confirmed. Further details are expected to be revealed later this summer. 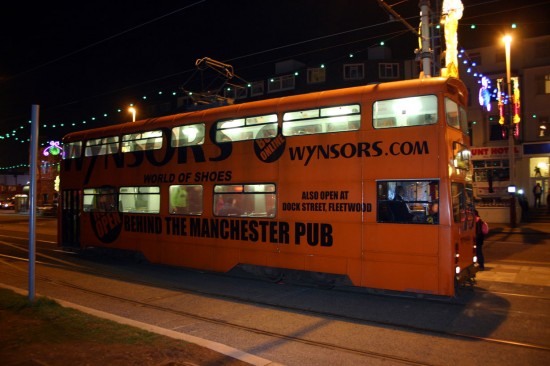 The last time Blackpool Jubilee 761 ran on its home tramway was 6th November 2011. It is seen here on that date at Manchester Square preparing to head up Lytham Road and then into Rigby Road Depot. (Photograph by Gareth Prior)