Work on preparing Blackpool Boat car 604 for a return to service is nearing completion, with the tram having now left the Paint Shop in a fresh coat of green and cream. As we have reported previously, the tram is being sponsored by the George Formby Society and will be named ‘George Formby MBE’, as well as receiving images of the iconic Blackpool performer on its trolley tower.

604 has been outshopped in the 1970s style of fleet livery, meaning that it differs from sister car 600 as it lacks the distinctive green ‘V’ shapes at each end which complement the beading on these trams. Indeed, with no less than three Boat cars now painted in original 1930s livery at various different locations, 604 will be the ‘odd one out’ although it will also be the plainest of the class in appearance. The tram looks similar to how it did when it last ran in 2010, but now lacks the attractive green skirting panels. Perhaps it would have been better to restore the tram to its popular red and white ‘Routemaster’ livery which it carried during the 1990s – but the most important thing is of course that the tram will be back in service on its native tracks, as another valuable member of the retained heritage tram fleet.

604 is currently in the Fitting Shop where presumably it is undergoing further work in preparation for its return to traffic. A launch ceremony for the benefit of the George Formby Society is expected to take place and originally it was indicated that this would take place on 9th June, although it is not certain if this is still the case.

2012 is shaping up to be a golden year for the Boat cars with 604 set to join 600 in use at Blackpool, 233 (605) operating at Beamish and 236 (607) soon to enter service at Crich. This will leave just car 602 missing out – you may remember this tram had originally been earmarked for the George Formby sponsorship deal, but closer examination revealed that 604 was in a better condition. It is still hoped that 602 will run again in Blackpool, but for now the car is tucked up in the Rigby Road depot waiting for the day when it too can return to the limelight, which would five Boats (or six if you count the mini one at Seaton!) to run in the UK for the first time since 2004. 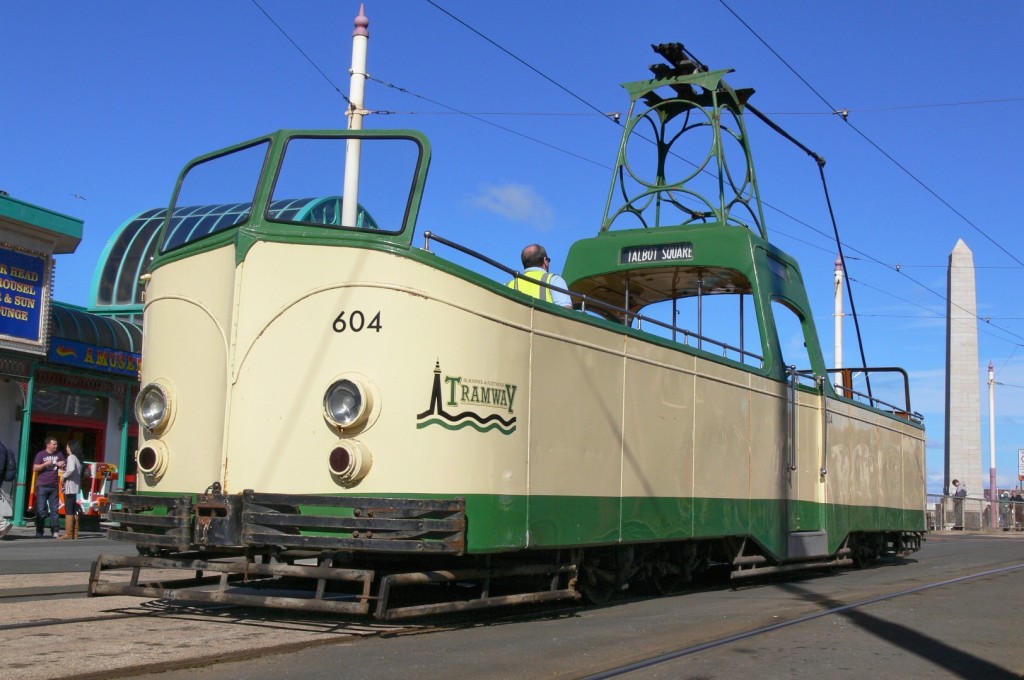 As it stands, Boat 604's last day in service was 25th September when it was captured at North Pier in glorious sunshine. (Photo by Andrew Waddington)