With much of the UK currently sweltering under nice warm sunshine it is rather apt that the second tram to feature in our irregular “Lost Trams” series is an open topper – Blackpool Dreadnought 59. This very popular tram has been out of the public eye since it was moved to the National Tramway Museum’s Clay Cross store in 1995 and in weather like this it is badly missed.

Built in 1902 and withdrawn in 1934, 59 was one of several trams saved by Walter Luff for posterity and it languished at Copse Road depot until the occasion of the 75th anniversary of the Blackpool Tramway when it was resurrected for service in 1960. Just five years later the tram hit the road to join the national collection but it was soon discovered that a body overhaul was required if the tram was to operate for long. It returned home to Blackpool in 1975 where the work to restore this tram was to be undertaken by the Blackpool Technical College. Before this work was to commence the tram was displayed on Blackpool Prom for all to see and after this it moved to the College for the work to be undertaken. Once the work was completed in 1976 the tram headed to Rigby Road depot where it started to see
use on special duties and private hires. It remained in Blackpool until 1990 when it headed back to Crich. Any hope there was of 59 joining the operational fleet here though were soon dashed as it was decided the tram would need a full overhaul before carrying passengers again. Come 1995 and it was decided that the tram would be moved to Clay Cross for further storage where the tram remains to this day. Many would like to see
this tram restored to the operational fleet at Crich but until funds can be found this tram is likely to remain out of the public eye at Clay Cross for the foreseeable future. 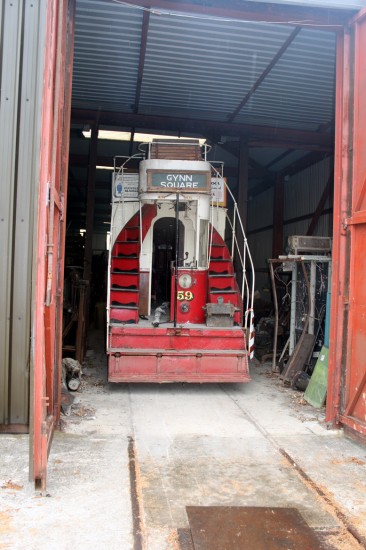 This view shows Blackpool Dreadnought 59 at the Clay Cross store back on 23rd May 2008. (Photo: Andy Bailey)